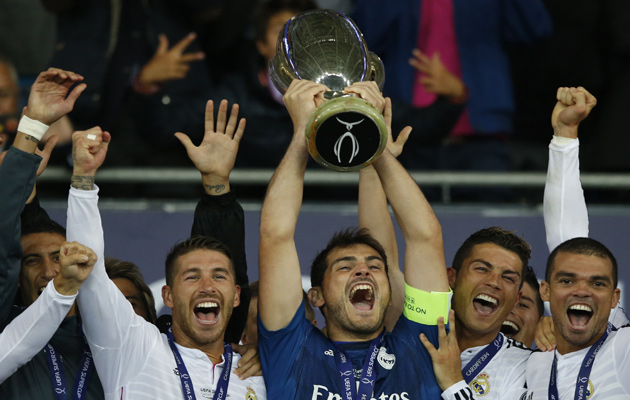 Real Madrid have begun the new season as they ended the last: with a European trophy. Two goals from man of the match Cristiano Ronaldo secured the UEFA Supercup just as he had contributed one to the Champions League triumph in May.

Back in Libson the opposition was Spanish and history repeated itself to the extent that Atletico de Madrid had been vanquished then and now it was the turn of Europa League holders Sevilla to be despatched in the Cardiff City Stadium.

Madrid thus won the Supercup for the second time, 12 years after their original success. Before the match homecoming Welshman Gareth Bale had insisted that the target for this season was all six possible trophies. So, one down and five to go.

Ronaldo was an obvious choice man of the match, not only for the two goals but for their context. The Portuguese superstar moved easily and nimbly around the pitch and showed he had recovered from both the injury and distress which had scarred his World Cup.

He received his award afterwards from his old Manchester United manager Sir Alex Ferguson and confirmed: “I felt good. It was my first official match and I wasn’t sure what was going to happen but I managed to score early on and that gave me confidence to keep working.

“I think we played better, looked to score more often, deserved the goals and were just winners.”

Ronaldo also paid tribute to high-profile new signings Toni Kroos and James Rodriguez as “crucial players for us” in helping him win a trophy which had hitherto eluded him.

The arrivals of the German and Colombian World Cup stars have provided Madrid with what the Spanish media labelled the ‘300m attack’ and it took them just half an hour of patient football to take command.

Bale switched to the left for the first time and crossed to the far post for Ronaldo to make the kill.

Sevilla should have been on terms within minutes. Poor Madrid defending should have been punished by Daniel Carrico but the midfielder’s close-range flip at goal was parried by Casillas who earned a grateful kiss on the cheek from Fabio Coentrao.

Three minutes into the second half and the match was effectively over. Kroos found Benzema and the Frenchman angled a further pass forward into the stride of Ronaldo who bent Beto’s fingers back with the power of his left-foot drive inside the far post.

Minutes later Kroos also had a yellow card to mark his debut. But if that was the price for a trophy on his debut then the German probably did not mind too much.

The chasm between the clubs was illustrated by the issues raised by the coaches after the game.

Sevilla’s Unai Emery regretted the need to have sold leftback Alberto Moreno to Liverpool for £12m on the eve of the game. Madrid’s Carlo Ancelotti, by contrast, hailed the “extraordinary quality” of the squad at his disposal which had the potential to “reach the highest heights.”