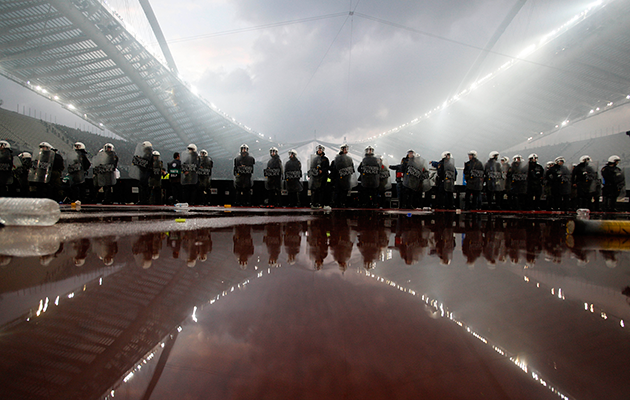 Greece’s Super League will finally kick off this weekend after the Hellenic Football Federation (EPO) and the Super League ended their dispute over the appointment of referees .

Greece ran the risk of being being suspended from international football by FIFA andUEFA after the government became involved in a long-running row over the selection of referees by ordering the postponement of the new season on the grounds of public safety.

Greek Deputy Minister for Sport Stavros Kontonis claimed that there were huge security risks if the league kicked off on schedule.

The decision by EPO to replace regular judges as members on the Ethics Committee was irresponsible, claimed Kontonis, while he urged the judges to remain on the ethics committee.

Meanwhile, the Sport Minister also produced letters from Panatinaikos, AEK and PAOK threatening to withdraw from the league in protest at EPO’s selection of referees for the forthcoming season. The police also warned about the potential for hooliganism if the season started with the matter unresolved.

But eventually, former FIFA referee Kyros Vassaras was appointed as chief arbitrator on the refereeing committee until the EPO elections on Oct.1, meaning matches will now get underway.

The league was original scheduled to start on August 20.

“The championship will start; the fans are rightly anxious because football should be played,” said the EPO president Giorgos Gkirtzikos is a statement.

“We have found a solution to the problems by bringing in Mr Vassaras. He is a member of UEFA and one of our own,” he added.

“I hope for a great season ahead for the Super League and that Greek football can continue to improve its status.”

FIFA forbids government interference of any kind in its member federations and in April this year it had threatened to suspend the country’s FA when the government ordered the Greek Cup final to be postponed on safety grounds.