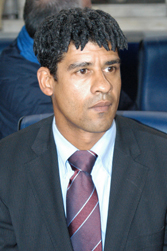 Barcelona coach Frank Rijkaard is to leave his post at the end of the season and will be replaced by the club’s reserve team coach Josep Guardiola.

Club president Joan Laporta said that Rijkaard “had made history with Barcelona” and that Guardiola “would continue the footballing ideology, which had led to success.”

“Frank has been the leader of the team that led us to glory in Paris, but the cycle is finished because the results haven’t gone our way in the last two years.”

But Barca have not won a trophy since and currently lie third in the table. The announcement came less than 24 hours after Barcelona were thrashed 4-1 by rivals and newly-crowned La Liga champions Real Madrid.

The 37-year-old Guardiola won six league titles in 11 seasons as a midfielder with Barcelona.

Laporta confirmed Guardiola’s appointment at a press conference, saying: “The administration of the club has decided that at the end of this season Frank Rijkaard will cease to be the coach of Barcelona and the position will be occupied by Josep Guardiola.

“Josep has the knowledge, the optimism and the self-confidence to achieve success.”

Laporta said he would give details of Guardiola’s contract at the end of the season. He also refused to be drawn on which players would leave the club.