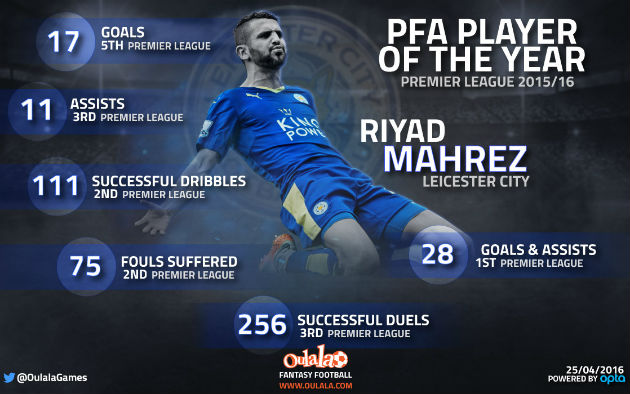 Mahrez – who fittingly scored the first goal during Leicester’s emphatic 4-0 victory against Swansea City – has been in sensational form for the Foxes this campaign.

The Algerian international has 17 goals and 11 assists in the Premier League, and the partnership forged with striker Jamie Vardy, has been pivotal to their team’s fantastic title charge.

Mahrez said: “All the credit is for my team-mates, seriously, and for my manager and the staff.

“Without them I wouldn’t receive this award and I wouldn’t score. It’s the team spirit, and I want to dedicate it to them.

“I’m very grateful to receive this award – it’s a pleasure. It’s extra special because, if the players vote for me, it’s because they’ve seen I’ve been great this year, so I’m happy.”

Congratulations to @LCFC’s Riyad Mahrez on being voted @PFA Player of the Year by his fellow professionals 👏 pic.twitter.com/NJqVXqCwAS

Meanwhile, Tottenham’s Dele Alli won the PFA Young Player of the Year award for his brilliant performances from midfield.

Alli could not be present to collect his award because of Tottenham’s crunch title game against West Brom tonight. However he did have a message for all his supporters.

“Thank you Ossie, the Tottenham legend for receiving this award for me.

“Sorry I can’t be there tonight but we have a big game tomorrow. Thank you to everyone who voted for me.
“I feel honoured to win such a prestigious award and thank you to my friends, family and all the staff at Tottenham.”

Stats and Graphic supplied by www.oulala.com