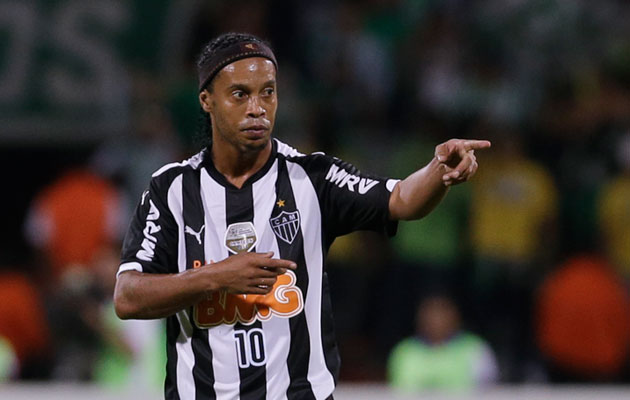 De Assis said Ronaldinho and Kalil will give a joint press conference on Wednesday when the player’s future plans will be revealed.

“He will play until he’s 42! He will reveal his future destination on Wednesday,” said De Assis, according to the Globo Esporte website.

Certainly, if he is permitted to continue playing at walking pace, then 42 should be a breeze for the Ronaldinho.

And, given his enduring profile, any glimpses of the otherworldly skills he still occasionally demonstrates, he remains a draw. Indeed, within hours of his availability the internet was rife with speculation about his next destination.

Boca Juniors emerged as possible candidates, with the 34-year-old identified as a potential replacement for Juan Roman Riquelme who left the club last week to join Argentinos Juniors.

Given his veteran status, MLS (inevitably) been touted, along with the Premier League (West Ham, QPR and Stoke City all reportedly interested)

But, according to player agent Lou Sticca, who helped bring in Juventus legend Alessandro Del Piero, it is in Australia that Ronaldinho’s future lies.

“Some calls have already been made and now it’s up to A-League clubs to make a play for him,” he toldFox Sports.

“Anything’s possible and he’s exactly the sort we should be bringing here.

“Australia would be a new frontier for him. He’d love the lifestyle and the way fans would respect him.

“Ronaldinho’s globally recognisable and an entertainer.”

On, and increasingly off the pitch, that is undeniable.

Frontrunners are reported to be Sydney FC who are looking for a new star player after the recent departure of Del Piero. Although, presumably, when searching for a marquee name, the A-League outfit are looking for someone who will play like one, rather than someone who resembles one.