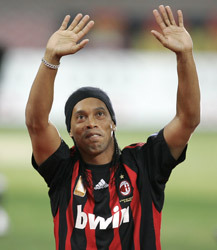 Ronaldinho has reportedly been fined by Milan after the club discovered he attended a party during the week leading up to the derby defeat to Inter.

The rossoneri lost the game 2-0 to an Inter side reduced to nine men side and the defeat has dealt a serious blow to Milan’s hopes of regaining the Scudetto for the first time since 2004.

Ronaldinho is alleged to have partied in a hotel suite, making it the fourth time he has been caught doing so this season.

The 29-year-old has been given a ‘non-official’ fine, which will reportedly donated to the Milan Foundation.

“I will not comment on the reports. At the end of the day, we are dealing with in-house business between the club and the player,” Milan Vice-President Adriano Galliani said on Tuesday.