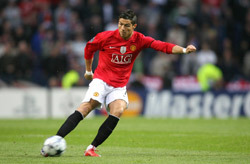 And the Portuguese is convinced the club can repeat last season’s double haul of the major trophies on offer.

”We have an opportunity to win everything and we are very confident that we can,” he said. ”We did not play fantastic in the last five or six games but we expect the next ones will be better because of what we did last night.”

In overcoming Porto at the Stadio do Dragao, United became the first English team to beat their opponents on their own ground, with Ronaldo scoring what he later described as his best ever goal.

”It is the best goal I have scored,” he said. ”It was a fantastic strike and I can’t wait to see it again on DVD. I am very happy with it.”

It means for the first time United must face English opposition in a two-legged European tie, with old rival Arsene Wenger for a place in the final.

”It would be tough no matter who we played but the fact it is another English side gives a different type of spice to it,” said United manager Sir Ferguson. ”We are two good footballing sides, so it should be a terrific semi-final.

”Our game earlier in the season was fantastic. It was the way football should be played and we will look forward to it. The first leg is at home, so 1-0 would be perfect for us. But it is not going to be easy.”

Ferguson acknowledged that Ronaldo’s strike was as good as any he could recall.

”I will have to trawl a long way back through my memory bank to come up with anything as good as that,” said Ferguson. ”It was a sensational goal. It was a great strike and to do it so early gave us the platform to go on and win.

”It put them on the back foot and I really don’t think they had a chance after that.”Arsenal and Man Utd both win to join Chelsea and Barcelona in the semi-finals. See the full BestPrice outright betting here.