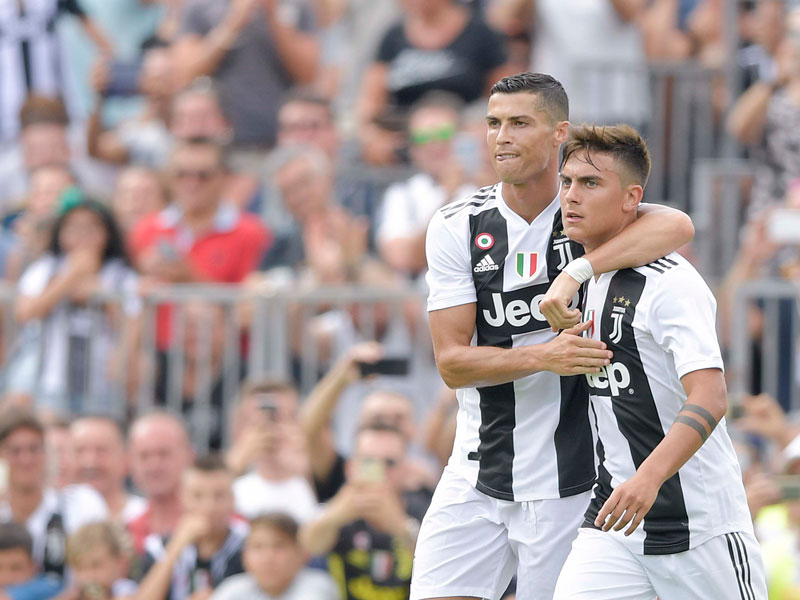 Paddy Agnew’s Notes from Italy: Ronaldo Gets His Juventus Show Off To Good Start

All things Juventus  begin at Vilar Perosa. Since 1931, the club has been formally opening the season with an inhouse Juve A v Juve B kickaround at Vilar Perosa that has seen such as Omar Sivori, Michel Platini and Paul Pogba take their first tentative public steps in a Juventus shirt.
So it was only fitting that CR7, the latest superstar to arrive in Turin, should have made his semi-official club debut at Vilar Perosa on Sunday. 40 kilometres south-west of Turin and situated within sight of the French Alps, the village is home to an 18th century former hunting lodge which for nearly 200 years now has been the summer home of the Agnelli family. The Agnellis, of course, are the Turin industrial family which not only founded the FIAT motor car giant but which counts Juventus as arguably the brightest jewel in the family treasure box.
Normally, the Vilar Perosa match prompts only a relative media interest. It is not usually seen as anything more than a page of folklore in the annals of Italy’s uncrowned royal family.  The arrival of Ronaldo changed that… Not only was there a 600 strong security guard around this town of 4,000 approx inhabitants but the town itself was also sealed off and only open to those 5,000 or so lucky fans in possession of a match ticket. 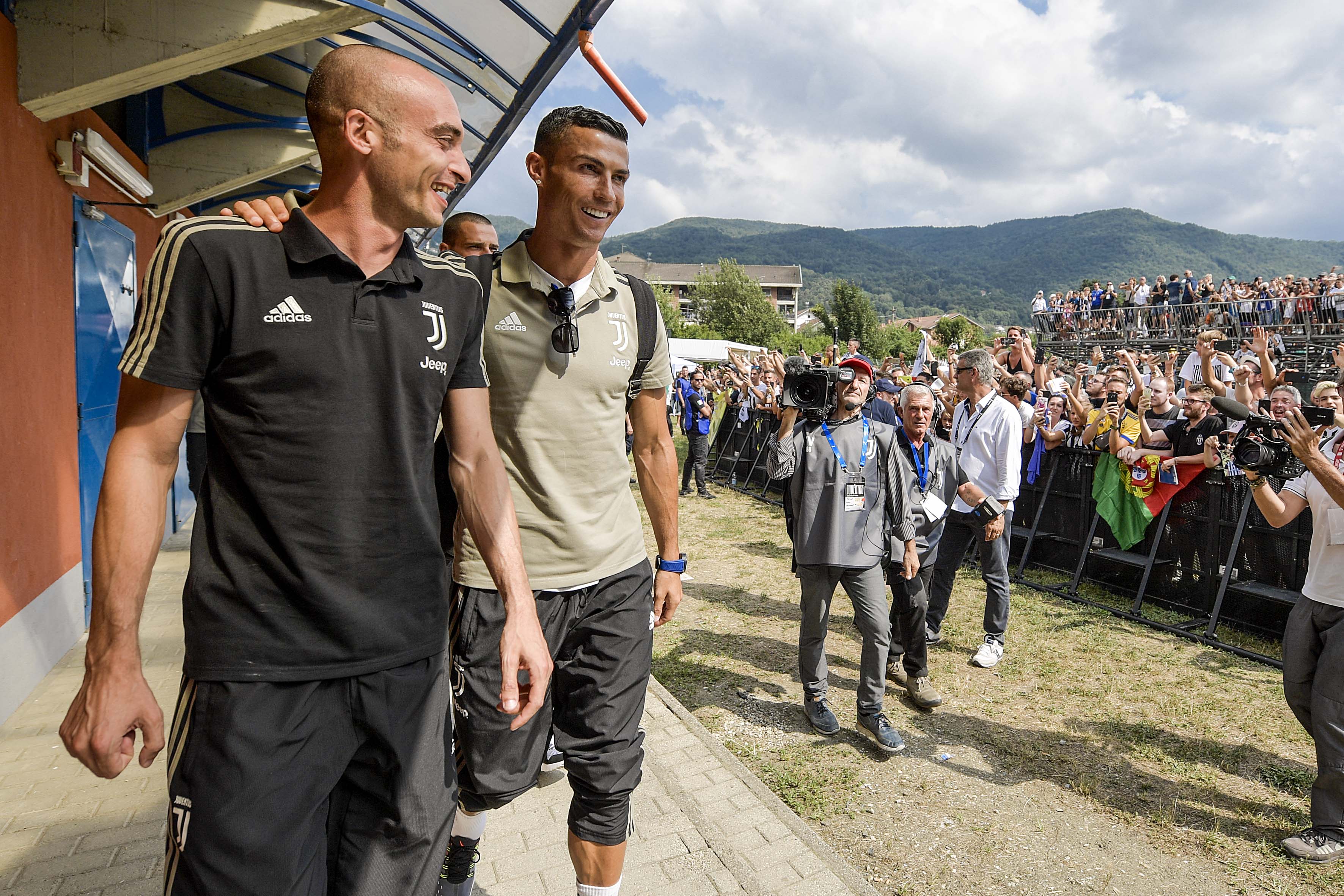 Ronaldo in front of the fans before the game (Getty Images)

Fittingly, it took Ronaldo only seven minutes to get his name down on the scoresheet. In a game in which the Juventus B marking was hardly “tight”, he had little difficulty escaping his marker to slot home an obvious enough long ball from Juve attacking  midfielder, Federico Bernardeschi.
Sunday’s 45 minute showing in the Juventus shirt – Ronaldo was substituted at halftime – obviously told us nothing that we did not already know but the least you could say was that Ronaldo got things off to a perfect start. As of next Saturday evening, the season begins for real with Ronaldo due to make his first competitive appearance in a Juventus shirt away to Chievo in what will be the very first game of the new Serie A season. For the record, in case you had forgotten, the “Old Lady” has won the last seven consecutive Serie A titles.
[collection name=”small” accordion=”mobile” excerpt=8]
Despite that domestic dominance, it has been customary for the last three or four years, to preview the Juventus season with the observation that, frankly, nothing matters as much to Italy’s winning-most club as the Champions League final. With the arrival of Ronaldo, that pressure has clearly increased. Beaten in two of the last four finals, Juventus dearly want to get back there again, and win it this time, a point not hidden by any of the club heavyweights:
“This year, we’ve got to move on from the dream to the realisation. We set out to win everything”, said club President Andrea Agnelli in his pre-match get-together at the family villa with the squad. His cousin, John Elkaan, the chairman of Fiat Chrysler Automobiles (FCA) sounded equally ambitious:
“This year we have a really strong Juventus, one of the strongest ever… Every year, when we meet up here, on the one hand we are celebrating our past successes but on the other we’re thinking about how much we still want to win…”
Even coach Massimiliano Allegri, normally a man to calibrate his words carefully, could not hide the Juventus ambitions under any sort of bushel, saying:
“This year, more than all the previous years, we’re determined to win the Champions League. After losing two finals, we’ve really got to try to win it…but you always need that little bit of good luck as well as of humility…
Inevitably, Allegri had words of praise for his most famous new boy, saying:
“Ronaldo is living proof that you don’t win five Balon d’Or just because you are technically gifted.   He is a player who puts himself under pressure every day and that has helped him achieve fantastic results.
“The team is already itching to go out there an win and the more quality you have the easier it is, above all in the Champions League. To win that you have to score goals and in the last few years Ronaldo was often the leading goalscorer…”
Allegri also had a few words to say about another of his big names, returning prodigal son, Leonardo Bonucci, back at Juventus exactly one year after he stormed out in a temper, joining AC Milan instead. In a remark which suggests that past differences between himself and Bonucci have been laid aside, Allegri said:
“He (Bonucci) is a very important and very experienced player who will greatly strengthen our defence…”
As for Bonucci, talking with reporters this week about his famous new companion, he said this:
“Well, at least if we draw Real Madrid again in the Champions League this season, we won’t start off 0-1 down because of him.   This time, he is playing for us…”
Stay up to date with all the news and transfers by clicking on the highlighted links.
Don’t forget to follow World Soccer on Facebook and Twitter.