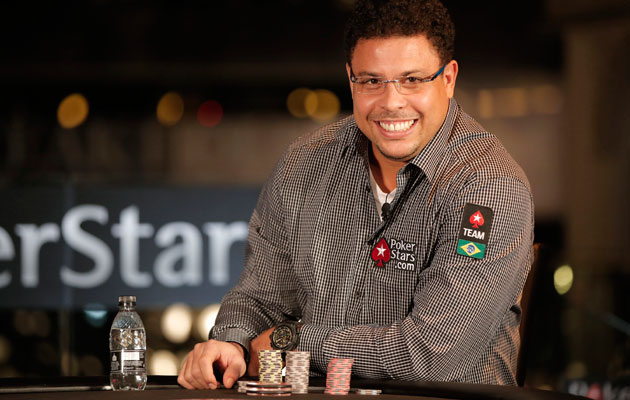 Former Brazil striker Ronaldo, last seen helping organise the 2014 World Cup in his native Brazil, is enjoying some success in a new career…as a poker player.

Last week he entered the PokerStars Caribbean Adventure event in the Bahamas, and four days into the tournament, remains in contention to win the $1.4million first prize.

Ronaldo has worked his way to 18th place out of the 57 remaining competitors, guaranteeing himself a payout of at least $24,140.

He has accumulated a chip stack of 512,000, nearly 100,000 above average, as he hopes to make the final table and a chance at that million dollar first prize.

It’s not unusual for former sportsman to turn their hands to poker when they retire. Last year, Sergio Garcia played this very same event and finished in 51st place to earn $35,000. Cricket’s Shane Warne, arguably the greatest spin bowler of all time, was until recently sponsored by 888.com to promote their online poker site. He has a number of cashes on his poker résumé.

Ronaldo isn’t the only former footballer who see poker as a way of satisfying his competitive urges. Former England international Teddy Sheringham has career winnings of $210,878 in live tournament, while his former strike partner, Tony Cascarino, has won over half a million dollars since he hung up his boots, including one win of £168,000 back in 2009.

Former Sweden striker Tomas Brolin was another to be lured to the felt, enjoying some success a few years ago, including one tournament in Monte Carlo where he won $60,000.

More recently, Barcelona’s Gerard Pique has played in poker’s equivalent of the World Cup. Just days after winning Euro 2012 with Spain, the defender was playing the World Series of Poker Main Event, held every year in Las Vegas.

Brighton chairman Tony Bloom is one of poker’s high rollers, having won over 3 million dollars in live tournaments.