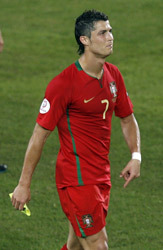 Cristiano Ronaldo has confirmed that he hopes to “complete his dream” of moving to Real Madrid, despite Manchester United insistence that he is “not for sale”.

The European champions issued a defiant statement on Friday which read: “We are not listening to offers.”

But the Portugal winger has ended months of speculation about his intentions by revealing he would like to “take advantage of a great opportunity”.

“Everybody knows what I want but things don’t only depend on me,” he said. “I am not the person who decides but I hope to complete my dream.”

Ronaldo revealed that he made up his mind up about leaving Old Trafford before the Champions League final.

And he also admitted that Portugal coach, Luiz Felipe Scolari, about to take over at Chelsea, advised him to make the move.

“It is a dream, a step forward,” Ronaldo replied when asked about the prospect of playing at the Bernabau.

“For me, it is a great opportunity and, as Scolari says, that train passes by only once and we have to take advantage of it.”

Ronaldo, who has not spoken to United manager Sir Alex Ferguson, suggested he would make a public statement about his plans over the next few days.

“It is my opinion,” added Ronaldo. “That is why I don’t mind if people get upset. It is my decision. It is what I want.”

United have already reported Real Madrid to Fifa over what they claim is an illegal approach to Ronaldo, although the organisation decided to take no formal action.

However, Real Madrid president Ramon Calderon has insisted the transfer is far from a done deal.

“As we have already said many times, it is a problem between Manchester United and the player,” Calderon told AS.

“If the two resolve this situation and Manchester United want to call us then we will be happy and delighted with them because Cristiano is a great player.

“We can’t say anything more, we only talk about our own footballers and Cristiano is Manchester United’s.”