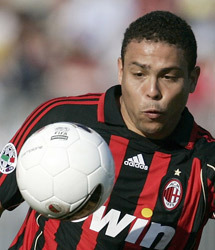 Ronaldo is unsure whether he will be able to continue playing after his latest injury setback.

The Brazilian rupturing a tendon in his left knee during Milan’s 1-1 draw with Livorno in the Serie A last week. A successful two-hour operation at the end of last week was followed by eight days of physical therapy, but he will not be able to play again for at least eight or nine months.

“I have not decided what should be done,” Ronaldo said. “My will is to keep on playing. My heart tells me this, but my body is showing me signs that it’s tired, that it is asking for rest.”

“If, at the end, I am back in shape physically and I can play, so much the better,” Ronaldo said. “Otherwise, it will be a difficult decision to take, but that will be the decision.”

He has played only occasionally since joining Milan a little more than a year ago, but his scoring rate of nine Serie A goals in 16 starts showed that he still had plenty to offer.

Ronaldo has battled serious injuries throughout his career, and already had a career threatening right-knee injury when playing for Inter eight years ago. He missed the following season, but came back strongly at the 2002 World Cup, and was instrumental in Brazil’s fifth triumph.