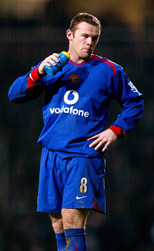 Wayne Rooney has admitted he is humbled by being compared to Manchester United legend George Best.

After a wonderful display in the victory over West Ham on Sunday, United manager Sir Alex Ferguson claimed that the 20-year-old was the best young talent he had seen in his time.

Rooney, however, insists that he has a long way to go before he can be mentioned in the same breath as Best.

“But hopefully one day in the future people will be talking about me like that.”

Rooney scored once and set up another as United triumphed 2-1 in a match preceded by one minute of loud applause in honour of Best, who died on Friday.

“I hoped somebody would produce moments in the game that reflected George Best,” said a Ferguson afterwards.

“Wayne is only 20 and without question the best young player I’ve ever seen.”

“If he keeps developing and matures, goodness knows what he will become – but at the moment his appearances are a breath of fresh air in the game,” Ferguson added.

“He’s without question the best young player I’ve seen in my time.”

Rooney aditted he was inspired by Best’s memory.

“Seeing the images of George did inspire me – he was one of the best, if not the best player in the world,” said Rooney.

“I’ve got a long way to go before I get to that, but hopefully in the future someone will speak of me like that.”

“Perhaps it was fitting that Rooney put in a performance like that after the tribute to George Best,” said Pardew.

“Maybe he deserved to wear George Best’s old number seven shirt – he was that good.”