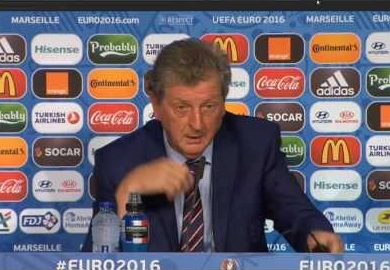 England had to make do with a draw last night after Russia’s Vasili Berezutsk equalised with a last minute header in stoppage time in Group B’s second Euro 2016 encounter.

England were controlling the game with good passages of play with captain Wayne Rooney dictating the tempo from midfield.

However Hodgson replaced him to the surprise of many and the England manager explained that Rooney was tiring because of the conditions.

“I thought he had a good game, but Rooney was tiring,” Hodgson said.

“Quite a lot of players out there were tiring because, although it wasn’t baking hot, there was quite a humid atmosphere which saps the strength of the players.”

Hodgson said that he thought that Jack Wilshere was a like for like replacement, but many would have argued taking off Raheem Sterling or even Harry Kane to give England more control.

“We just thought, with the control we had in the game and Wilshere on the bench, we could have the luxury of taking Wayne off the field and that Jack would do a similar job. I think that’s exactly what happened.

“Always afterwards you can look and think ‘Could we have used more subs? Could we have done a bit more?’ But we didn’t honestly believe we were in great difficulties during that time and we thought we’d see the game out 1-0.

“If anything, we replaced Raheem Sterling, who had worked very hard, with James Milner with a view perhaps to seeing the game out, but were unlucky to concede the late goal.”

The result leaves Group B delicately poised, with an enthralling clash between England and Wales on Thursday afternoon, with Gareth Bale and co waiting.