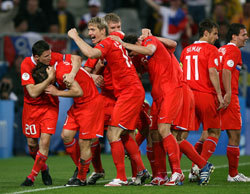 After managing just one goal, France have crashed out of Euro 2008 at the expense of current world champions Italy. See how that’s changed the outright betting here.

Russia are through to the quarter-finals of Euro 2008 after outplaying Sweden in a comfortable 2-0 victory in Innsbruck.

Goals from Roman Pavlyuchenko and Andrei Arshavin were enough to secure second spot in Group D for the Russians, and the manner in which they overcame a resilient Swedish outfit suggests that they will be more than a match for tournament favourites Holland whom they meet on Saturday.

It was a stylish performance by Guus Hiddink’s side. There had been indications in their previous game against Greece that this was a talented, young side full of promise, but tonight, that talent blossomed, and Sweden simply had no answer.

From the kick-off Russia looked the more adventurous side with the full backs Aleksandr Anyukov and Konstantin Zyryanov providing width and penetration whenever Hiddink’s side pushed forward.

The first opportunity fell to the highly rated Andrei Arshavin who was picked out by a cross from Anyukov but the Zenit St Petersburg forward glanced his header just wide.

The momentum was with Russia and it came as no surprise when they went ahead on 24 minutes. It was a wonderfully constructed goal involving Arshavin, Igor Semshov and Anyukov, who set up the unmarked Roman Pavlyuchenko for a sweet finish.

At this stage so dominant were the Russians that Sweden had barely left their own half, but a swift counter-attack almost brought an immediate equaliser. Anders Svensson crossed from the left and the ageless Henrik Larsson flicked a header onto the bar.

Russia remained relatively unperturbed by that scare and they almost doubled their advantage on 36 minutes when Pavlyuchenko hit the bar the bar with a right-foot shot and as the ball was headed back goalwards Isaksson palmed it away for a corner.

It was exhibition stuff from Russia, but as half-time approached, Sweden finally began to enjoy some possession in their opponents half. Ljungberg was teed up by Zlatan Imbrahimovich but he shot straight at Igor Akinfeev, while moments later the Russian keeper had to be alert to deny Mikael Nilsson.

Sweden emerged after the break knowing that they were 45 minutes away from elimination, but within five minutes of the restart, their hopes of making it to the knockout stages for the fourth major tournament in succession, evaporated in the face of another sweeping Russian move.

The impressive Arshavin, who was making his debut at Euro 2008 after serving a two-match suspension, began the move by finding the willing Zyryanov who returned the favour and set up Arshavin to slide the ball beyond Isaksson.

Sweden looked a beaten side and although they could not be faulted for a lack of effort, they rarely looked like getting back into the game. In fact, it was Russia, now playing on the break, who looked much the more dangerous side. Konstantin Zyryanov’s deflected shot hit the post, Pavlyuchenko wasted a glorious chance by heading straight at Isaksson and the Swedish keeper was on hand again to deny the impressive Arshavin.

It was a complete performance from Russia and one that will not have gone unnoticed by their next opponents Holland. That encounter will bring Hiddink face-to-face with his homeland and the country he led to the 1998 World Cup semi-final. On this evidence, it promises to be an intriguing contest.

After managing just one goal, France have crashed out of Euro 2008 at the expense of current world champions Italy. See how that’s changed the outright betting here.