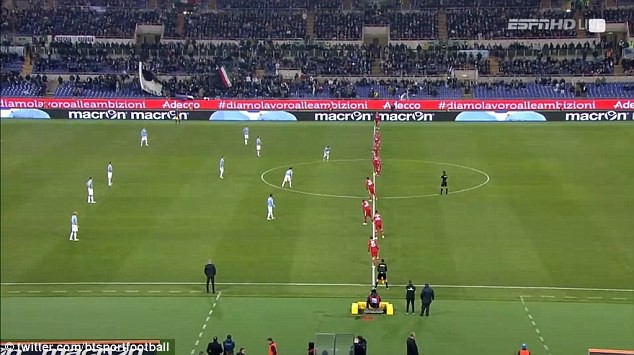 In what resembled the start of a rugby match rather than a game of football, 10 red Sampdoria players lined up on the halfway line to start the game at the Stadio Olimpico in Rome, ironically the same stadium that will host Italy’s matches when the Rugby Union Six-Nations Championship begins in February.

Only goalkeeper Emiliano Viviano stayed in his 18-yard area.

However, the tactic did not seem to help the visitors from Genoa as they went down to a 3-0 defeat that allowed Lazio to jump into third place in the league table after both teams began the day on the same number of points. Goals from Marco Parolo, Felipe Anderson and Filip Dordevic helped ease Lazio to a commanding win.

It will be interesting to see whether Sampdoria deploy the kick-off tactic in their next game at home to Empoli at the weekend, or whether it is consigned to the file marked ‘trash’ after just one outing.