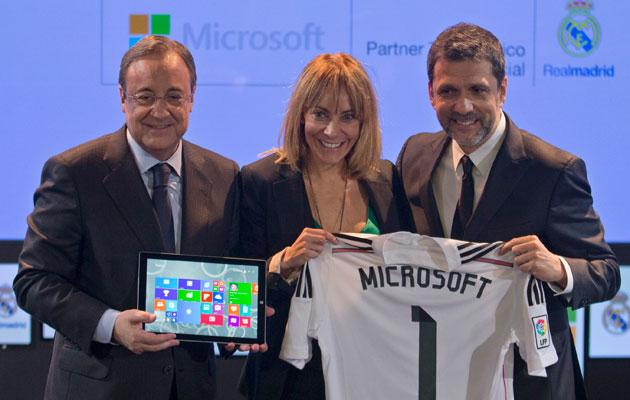 Santiago Bernabeu was the legendary president who built Real Madrid a stadium vast enough, back in the late 1940s, to welcome all the club’s fans in the city.

Now, 68 years later, the wonders of the technological age have enabled Madrid to extend Bernabeu’s vision to a digital stadium vast enough to welcome all the club’s fans around the world.

Madrid’s ground-breaking partnership with Microsoft was announced last November and the first significant fruit – Realmadridapp – was unveiled to be tasted and tested last night by current president Florentino Perez and senior officials of the football and software giants.

The belief of both Madrid and Microsoft in the significance of the application was illustrated by the presentational presence on stage of all the senior players from Iker Casillas to Cristiano Ronaldo as well as coach Carlo Ancelotti.

Indeed, the app was presented within the Estadio Bernabeu precisely where the current crop of Galacticos were first introduced to their new fans.

Microsoft has built a club-consuming digital platform with an app which will, the M-and-M men believe, provide an engagement with supporters around the world beyond anything attempted by any other sports outfit in any sport.

Madrid were hailed recently by Forbes as the world’s most valuable sports team at $3.263bn and have topped the Deloitte club ‘rich list’ of revenue generators for the past 10 years. Revenue last year was $746m.

The financial potential of ‘going digital’ in such an all-consuming manner is of particular importance for Madrid. The club’s domestic television revenues will be frozen for the next three or four years after the agreement by all clubs in La Liga to move to a centralised system of domestic rights sale from 2016.

But the app is about connection first and cash second. The latter is impossible without the former.

Perez explained: “We are taking Santiago Bernabeu’s original vision forward to the ‘Digital Estadio Santiago Bernabeu’ in which supporters will sit next to each other even though they are in different parts of the world.

“We have always been pioneers because in Real Madrid we always want to lead in excellence and be a global reference which is why we are working with an indisputable leading brand like Microsoft.

“The app has been designed so far for fans of football and basketball and can be utilised as a ‘second screen’ plus we can offer, with specific cameras for Realmadridapp, unique images for coverage before and after each game.

“It’s a strategic alliance which will implement a digital transformation of this club to a leading position in a new global scenario. It’s a unique way of contacting fans of Real Madrid scattered in all continents.

“In entering this spectacular virtual stadium [we can] do something which was once considered impossible — reduce the distance between Real Madrid and its supporters from thousands of miles to a single click.”

Madrid view the leap of technological faith as firing the world and outgoing European champions far ahead of clubs which provide only static social media provision through websites, Facebook, Instagram etc, but without the crucial three-dimensional engagement.

Perez’s enthusiasm was matched by that of Orlando Ayala, Microsoft’s chairman (emerging businesses), who extolled the potential of “reaching everyone individually at a global level.”

For Ayala a crucial enabling force was the development of cloud technology which offered the prospect of limitless data storage.

For both men the opportunities provided by the app will, they hope, not only provide fans with a vast new window into the club through its unique content but open the door to a new generation of income-expanding opportunities.

The days of $1bn club revenue may not be so far away, after all.