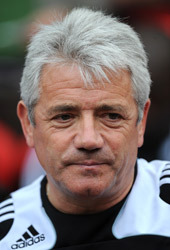 Kevin Keegan resigned from his job as Newcastle United manager on Thursday night so who will take over the St James’ Park hotseat? Click here for BP odds.

Newcastle have begun their search for a new manager after the resignation of Kevin Keegan.

Everton boss David Moyes and former Juventus coach Didier Deschamps are among the those linked with the role, while Gus Poyet, who worked alongside Newcastle’s Director of Football, Dennis Wise, at Leeds, has been installed as the bookies favourite.

Kevin Keegan’s second reign in charge of Newcastle United has come to an end after he resigned as manager.

In a statement released through the League Managers Association (LMA), Keegan confirmed he had quit.

“I’ve been working desperately hard to find a way forward with the directors, but sadly that has not proved possible,” he said.

“It’s my opinion that a manager must have the right to manage and that clubs should not impose upon any manager any player that he does not want.

“It remains my fervent wish to see Newcastle United do well in the future and I feel incredibly sorry for the players, staff and most importantly the supporters.

“I have been left with no choice other than to leave.”

The LMA confirmed that Keegan failed to resolve his issues despite holding talks with the club over the past few days.

“The board of directors of Newcastle United Football Club and Kevin Keegan have been in detailed discussions,” said an LMA statement.

“The letter which Kevin received today from managing director Derek Llambias has failed to resolve the matters in issue between him and the club and accordingly he feels he has no alternative other than to resign.”

Disappointed
A statement on the club’s official website read: “Newcastle United football club is sad and disappointed that Kevin Keegan has resigned.

“Over the last few days the club has devoted itself to the discussions it has held with Kevin and as a result of those discussions had put together a set of practical suggestions for how to move forward.

“Today the club made it clear to Kevin that if he had any outstanding concerns on its proposals, he should raise them with the club.

“The club regrets that Kevin has, instead of taking up that offer, chosen to resign.”

Kevin Keegan resigned from his job as Newcastle United manager on Thursday night so who will take over the St James’ Park hotseat? Click here for BP odds.