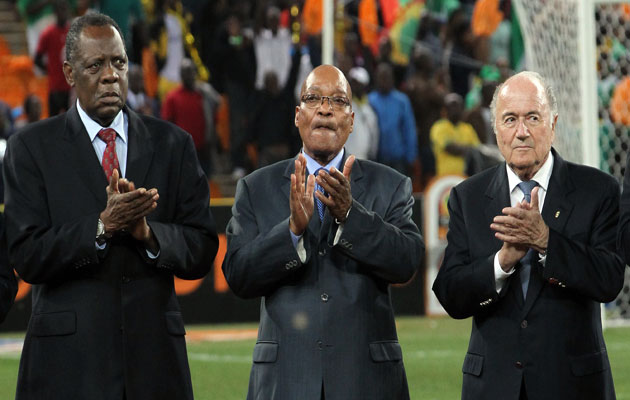 Sepp Blatter will receive the support of the vast majority of African countries at this year’s FIFA presidential election, senior officials from the continent have confirmed.

“Africa is solidly behind Blatter. You will find he is very popular on the continent,” said Kwesi Nyantakyi, the president of the Ghana FA and a Confederation of African Football (CAF) executive committee member.

Blatter, FIFA president since 1998, is expected to face four challengers in his bid for re-election on 29 May.

“The continent is united behind him,” added the former South African FA president Molefi Oliphant, who still serves on the CAF executive. “We made a formal endorsement of his candidacy last year at our meeting in Rio de Janeiro already.”

Blatter’s popularity stems from the generous financial assistance FIFA has provided Africa since he became president in 1998. He is seeking a fifth successive term this year.

“He has done a lot for the continent. It is he who has set up the financial assistance programmes and who through the Goal project has built infrastructure in all of the countries,” added Nyantakyi.

“The Europeans don’t understand that. They say it is not his own money but FIFA’s but that’s not the point. He is the one who set up all the assistance programmes that have helped boost African football.”

Goal was initiated by Blatter shortly after he was elected in 1998. It has built training centres, accommodation, pitches and offices for cash-starved associations.

Prince Ali has welcomed Van Praag’s decision to enter the presidential race, describing him as a “credible candidate” who will enhance the electoral process.

“We welcome other credible colleagues from the football family who want to join a genuine debate about the future of Fifa,” Prince Ali said in a statement on Tuesday.

“This election campaign is not about personalities, it is about what is in the best interests of football and the world governing body of the game going forward. It is good for democracy that Michael van Praag has made this announcement.”

The former France international David Ginola is also standing in what is widely regarded as being a publicity stunt for his sponsors, a betting company.