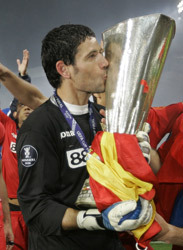 Sevilla coach Juande Ramos felt his side had deserved to win the Uefa Cup following their dramatic penalty shoot-out victory over Espanyol.

On an absorbing night at Hampden Park goalkeeper Andres Palop turned out to be the hero for Sevilla as he made three saves in a 3-1 shoot-out success, to ensure that his side retained the trophy they won against Middlesbrough last year.

The shootout followed a dramatic 120 minutes in which the teams could not be sepearated: twice Sevilla went ahead only to be pegged back by a tenacious Espanyol side that had been reduced to ten men midway through the second half following the dismissal of Moises Hurtado for a second yellow.

“I am proud, happy and satisfied. We were never behind, we were ahead twice and they caught up with us,” Ramos said.

“We had chances to get the third goal but we weren’t able to close the game out.

“Espanyol fought hard with ten men and it was difficult to play against them.

“Finally the penalties arrived but overall Sevilla were the superior side.”
Palop played down his match-winning penalty shootout saves.

“I’m not a hero. I’m just one more player in this team. This is a victory for everyone, not just me.”

“It’s a cup to remember forever,” added the keeper.

“I’ve scored, I’ve laid on a goal and now saved some penalties.”

With Sevilla still in contention for the Primera Liga title, the club will almost certainly be playing in the Champions League next season.

“The sky is the limit for this team. We have got a lot of ambition and we want to earn our place among the big teams,” Palop added.

Espanyol coach Ernesto Valverde paid tribute to his players, and admitted he was proud of their efforts.

“We have a good goalkeeper and good scorers but their keeper was absolutely outstanding and that was the crucial part of the game,” he said.

“The team fought with a great heart. We lost the final on a penalty shoot-out again but we walk away proud.”