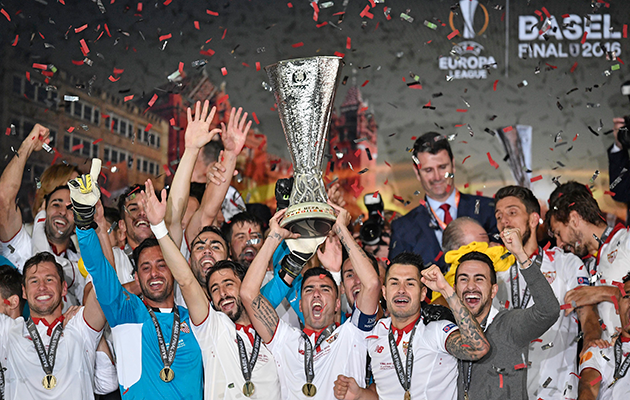 Sevilla won ‘their’ UEFA Europa League trophy for a third successive almost unnoticed such was the hype surrounding Jurgen Klopp and his high-tempo rebuilding work at Liverpool.

But the Spanish club were well worth their 3-1 victory margin after responding to a vigorous opening half from European football’s old stagers.

History is no match for the here-and-now – as Klopp will reflect the forthcoming season which will give him all the time he needs on training ground. Liverpool had been within 90 minutes of reaching the Champions League; but their Basel beating sunk them out of European competition altogether following an eighth-place finish in the Premier League.

Sevilla coach Unai Emery talked after the game of the “marriage” between his club and the Europa League. His players had won by displaying not only the self-confidence born of previous triumphs but of their loyalty to each other.

Whereas Liverpool had weaknesses ruthlessly exposed all over the pitch, Sevilla were solid, determined, cohesive and possessed far more class. Their fans, jammed into one corner of the stadium, may have been outnumbered four to one but football is not all about statistics.

Only one really matters: the final score.

Liverpool led at half-time through a delicately-struck effort from Daniel Sturridge but Sevilla levelled within 17 seconds of the second-half restart through Kevin Gameiro to puncture Liverpool’s frail balloon. Two further goals from captain Coke wrapped it up.

The pride of Anfield complained about two possible penalties for handball in the first half and an unjustified claim for offside on the third Sevilla goal. But Sevilla earned their fortune and capitalised on it. Whatever qualities Klopp possesses, in instilling belief in fans and players and generating high-tempo football, he still needs to learn about winning cup finals.

Sevilla delivered the lesson and left Klopp rueing a fifth final defeat in succession and second in three months with Liverpool.

For him the equaliser and its timing were crucial. He said: “In this moment we lost faith in our style of play. We changed from passing simply to playing slow and complicated. Our formation was not so compact any more.”

As for the decisions he added: “When it’s close, you need a bit of luck and we didn’t have any. [The third goal] was not a situation I have seen many times, for a referee to overrule the assistant. I have lost some finals and never had a bad decision made in my favour. I would hope for that to change but it didn’t this time.

“We are disappointed 100pc but in a week we will see more it more clearly and we will use this experience. We are not in an international tournament next season so we will not have a lot games on Thursday and we will use that time for training.

“On the way to the final we had a few moments where we over-performed and the boys showed what they are capable of but to show this consistently you need more time. They are young and it was a first big final and some day people will look back and say this was a decisive moment for the future of Liverpool FC.”

That decisive moment must mean, inevitable, some ruthless culling of a team who were not good enough, notably in defence where poor Alberto Moreno – once of Sevilla – was turned inside out most cruelly by his old team-mates. Sevilla, in the peripatetic Ever Banega in midfield, the rentless right back Mariano Ferreira, the incisive Vitolo and Coke and hard-running striker Kevin Gameiro, illustrated the qualiries which Liverpool lacked.

Klopp was left with only philosophy to console himself, saying: “I’ve had a lot of luck in my life and, to sit here as manager of Liverpool, I don’t think life has been unfair to me.

“I will try to reach the next final even though I know I can lose it again. There are bigger problems in life . . . but, right at this moment, it doesn’t feel like it.”