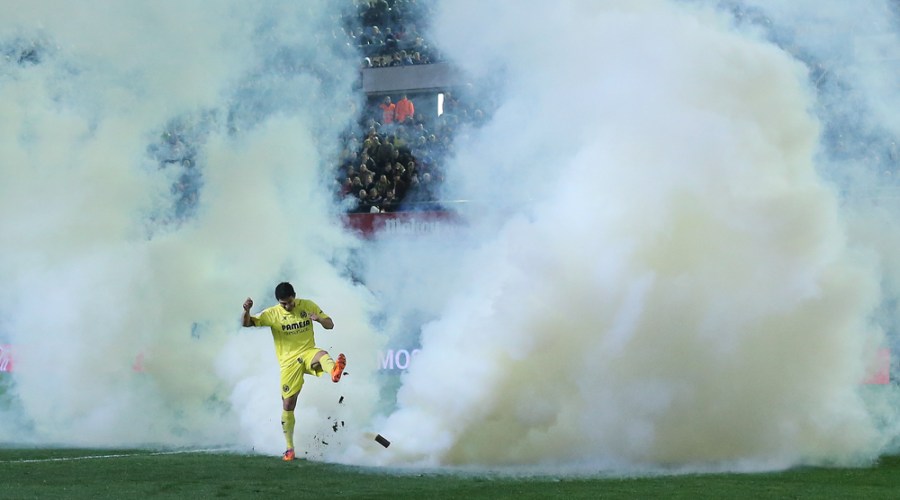 Celta were leading the match 1-0 at El Madrigal before white smoke began billowing out from around the Vigo club’s goal. As you can see from the video below, within seconds the ground was engulfed in tear gas, players were heading for the tunnel and distressed fans were heading for the exits.

Villarreal president Fernando Roig was particularly critical of the perpetrator, who is yet to be identified.

Speaking after the game, he said: “Villarreal condemns and laments what has happened.”

“This type of act in no way represents our fan base, which is calm and controlled.

The president also hinted at a smear campaign aimed at the club, suggesting that the person who threw the smoke canister may had a grievance against him or the club.

“I can’t make head nor tail of it. The ball wasn’t there, there was no one moaning at the referee, or anyone else, no tension,” he said. “Some gutless hooligan from outside the club has tried to damage Villarreal.

World Soccer’s Spain columnist, Sid Lowe, writing in today’s Guardian, explained why the incident was all the more shocking given the peaceful nature of Villarreal’s fanbase.

“Villarreal are not only a club without ultras, they’re a club that’s almost universally popular, and one that doesn’t even really have significant rivals,” he wrote.

According to Lowe, Villarreal now face the prospect of the closure of El Madrigal for anything from one game to two months.

Footage of the alleged perpetrator exists, though as to a determining a motive for this most random of acts, no one knows.