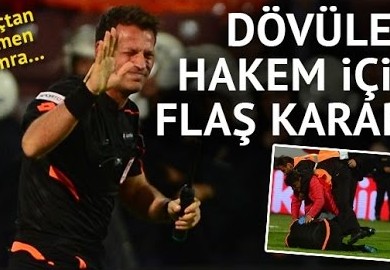 A Turkish Super Lig game between Trabzonspor and Fenerbahce was abandoned on Sunday after a fan ran on to the pitch and assaulted an assistant referee.

Trabzonspor were losing 4-0 when the incident took place and their fans had been throwing missiles on to the field. Then one fan jumped on to the pitch and pushed the official, Volkan Bayarslan, to the ground. He then punched Bayarslan while he was on the ground before stewards hauled him off the bewildered official.

The game was immediately called off with both sets of players and officials leaving the pitch.

“Trabzonspor fans stormed the pitch and attacked the referee… The game will be ruled 4-0 in favour of Fenerbahce,” Fenerbahce said on Twitter.

“As fans got on the pitch and beat up the assistant referee, the other referees went to the dressing room.”

Riot police were called as fans started fighting and throwing chairs at each other after the referee had abandoned the game.

Fenerbahce are expected to be awarded a win for the game meaning the points difference between themselves and Besiktas, the Super Lig leaders, will be reduced to one.