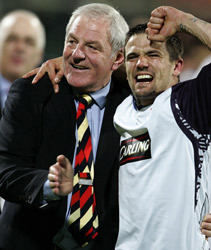 Rangers beat Fiorentina on penalties to reach their first European final in 36 years. They now face Zenit St Petersburg in Manchester on the 14th May. Click here for the latest UEFA Cup betting odds!

Walter Smith expressed delight after his Rangers side reach the Uefa Cup final with a dramatic penalty shoot-out win over Fiorentina.

Rangers, who were reduced to ten men following the dismissal of Daniel Cousin in extra-time, prevailed on penalties after being under the cosh for most of the night.

“We were put under quite a bit of pressure as the game wore on, but there were few clear-cut opportunities during the game,” he told BBC Sport.

“I’m delighted for everyone connected with the club that we’ve managed to get to the final.

“It’s been a fantastic achievement, right from the start of the season.

“To go and reach this final is terrific. I’m delighted for everyone at the club, from the chairman down to chief executive Martin Bain and everyone else,” he added.

Rangers will face Zenit St Petersburg in the final after the Russian side overwhelmed Bayern Munich 4-0 in the other semi-final.

“It will be nice to cross swords with (former Rangers boss) Dick Advocaat again,” added Smith.

“We saw the quality of his team beating Bayern Munich 4-0, who I thought would’ve been favourites for the tournament.”

Smith revealed that he expected to consolidate this season and that progressing to the final was beyond the club’s dreams.

Nacho Novo, who scored the decisive penalty, added: “I still can’t believe it. “It was a good performance by the team and it’s so exciting for the fans.”

Rangers didn’t deserve it
Meanwhile, a disconsolate Cesare Prandelli said his Fiorentina side did not deserve to lose.

“We have to accept it,” he said after his side were knocked out on penalties. “It has been a beautiful night and it could have ended better for us.

“I have to thank my players, who kept on fighting until the last minute.

“A team that has renounced to play has won, football is like this. Football sometimes awards teams that don’t deserve it.”

“This great adventure is over and we have to accept the result even if we surely deserved more.

“We gave everything we had trying to score until the last minute of extra-time.

“I’m sure we deserved to reach the final. Rangers came here just to stop us playing our best football and got the result they wanted.

“I have nothing to say to my players. The game would have been more entertaining if we were facing a team ready to play a bit more.”

Rangers beat Fiorentina on penalties to reach their first European final in 36 years. They now face Zenit St Petersburg in Manchester on the 14th May. Click here for the latest UEFA Cup betting odds!