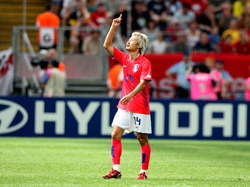 South Korea made hard work of their opening World Cup game, coming from behind to record a 2—1 win over Togo.

Togo showed no visible signs of the conflict that had disrupted their build-up to the tournament and were led by Hans Pfister, who had returned after walking out on the team last week.

In an attempt to combat the problems with shadows on the pitch experienced by television viewers, the roof in Frankfurt was closed for the game.

Whether the stifling heat and humidity created by the closed roof had a bearing on the sluggish pace of the game, is matter of speculation, but both sides seemed to be struggling to get their game going in the early stages.

Togo seem happy to sit back in their first World Cup match, giving South Korea plenty of possession and territory, although they are unable to translate their advantage into any meaningful chances.

Togo took a shock lead on 31 minutes when Mohamed Kamer burst through two static South Korean defenders before finishing with a terrific shot into the far corner of Woon-Jae Lee’s net.

Senaya came close to doubling Togo’s lead when he curled a free-kick over the wall only to see his effort acrobatically saved by Woon-Jae Lae.

South Korea were busy and energetic in their play but for all their enterprise they rarely threatened Agassa in The Togo goal and as the half-time whistle blew a shock looked on the cards.

In the opening minutes of the second half, Mohamed showed that his goal was no fluke when he skipped past two defenders and forced a good save from Woon-Jae Lee.

Ahn, who had come on as a substitute after the break, had South Korea’s first chance of the half, but in keeping with his team’s overall performance, his final shot was feeble.

Dick Advocaat’s team received a huge boost when Abalo was shown the red card for bringing down Park Ji-Sung when the striker burst into the penalty area. Chun-Soo Lee made them pay doubly for the misdemeanor by curling in a delightful free-kick to level the scores.

Despite the twin setbacks Togo continued to take the game to their opponents and but for some wasteful finishing could well have regained the lead. Moustapha Salifou and Mohamed both blazed over in good positions.

They were made to pay for their misses midway through the second half when substitute Ahn, the hero of the famous win over Italy four years ago, struck a wonderful shot past Agassa.

Ahn almost extended the lead when he collected a dinked pass in the Togo penalty area, but with only Agassa to beat, he fired the ball straight at the relieved keeper.

With the game appearing under control, South Korea were content to run down the clock by maintaining possession for the remainder of the game.

Today’s win was undoubtedly deserved, although on this form, South Korea look unlikely to match their achievements of four years ago when they were surprise semi-finalists.