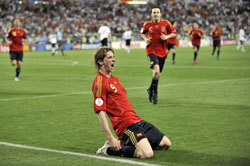 Spain claimed their first major title for 44 years after winning Euro 2008 with a 1-0 victory over Germany.

Fernando Torres scored the only goal of the game when he chipped over Jens Lehmann, but the 1-0 scoreline hardly reflected the true nature of a contest in which Spain were in complete control throughout.

Germany simply had no answer to the stranglehold exerted in midfield by the likes of Xavi, Iniesta, Fabregas, Senna and Silva, who combined to provide a measure of finesse and agility that no side in the tournament could match. With defensive security underpinned by the reliable Casillas and a potent frontline comprising Torres and Villa, coach Luis Aragnoes had done what many of his predecessors had failed to achieve: namely, blend a group of outstanding individuals into a formidable team. He now steps down, mission accomplished.

Spain began the game patient in possession but it was Germany who carried the initial threat, particularly down the left flank where Lukas Podolski and Philip Lahm were combining well and causing problems for Sergio Ramos.

The first chance of the game fell to Klose who pounced upon an errant pass from Sergio Ramos but overran the ball under pressure from Carlos Puyol. Ballack, who had been a fitness doubt right until kick-off, burst down the left and cut inside Puyol before delivering a dangerous cross into the penalty area.

Although not rattled, Spain took time to get their intricate passing game going, but when they eventually found their rhythm, they almost opened the scoring. On 14 minutes, Iniesta raced onto a wonderful pass from Xavi and crossed into the box where the backtracking Per Mertesacker forced keeper Jens Lehmann into a sharp reaction save. It was the closest we’d come to a goal and it highlighted the increasing threat of the Spaniards.

Further proof of the growing Spanish ascendancy came midway through the half when Sergio Ramos’ cross was met by a firm downward header by Fernando Torres on to the post.

As the half wore on, Germany were looking increasingly vulnerable and it came as no great surprise when Spain eventually achieved the breakthrough. Xavi was the architect of the goal, but it was the pace and strength of Torres that ultimately undid Germany. Collecting a measured pass from the Barcelona midfielder, Torres flicked the ball beyond Lahm and dinked a delicate chip over Lehmann into the far corner of the net.

Ballack, who was undergoing running repairs to a cut eye, saw his frustration get the better of him when he squared up to Puyol and received a booking for his troubles. With their most influential player struggling to have any impact, Germany were rudderless and looking bereft of ideas.

Joachim Low responded to the growing crisis by replacing Philip Lahm with Marcell Jansen. It was a like-for-like substitution and it was difficult to see how the introduction of another defender could change the shape of the game.

Nonetheless, Germany are nothing if not dogged and in a brief spell after the interval they finally began to take the game to their opponents. Schweinsteiger, who had been anonymous in the first half, began to make some threatening runs down the right flank, although his delivery remained erratic. Their best chance fell to Ballack who volleyed just wide after Puyol had given the ball away near his own corner flag.

Spain were fortunate to still have eleven men on the pitch when David Villa headbutted Lukas Podolski. The incident was not spotted by the referee, much to the dismay of the German side. Shortly afterwards Aragones wisely removed Silva.

Aragones responded to the mounting threat by taking off Cesc Fabregas and bringing on the more defensively-minded Xabi Alonso. If the switch was intended to steady the ship it worked, but more importantly it also improved Spain as an attacking outfit. A flurry of chances fell their way in a frenetic spell midway through the half, with Sergio Ramos and Iniesta bringing fine saves from Lehmann.

As Germany pressed forward in search of an equaliser, the more vulnerable they became to the swift counter-attacking of the Spanish. In fact, if a second goal was coming Spain looked far more likely to score it, and the outstanding Marcos Senna was just inches away from sealing the win after another sweeping move from Aragones’ side.

The game ended with Germany struggling to clear the ball out of their own half. They were a spent force who seemed unable to summon up the self-belief required to challenge Spain’s authority. It had been this way for much of the game as the men in red finally banished their reputation as international football’s great underachievers.

But for some wayward finishing from the victors the margin would have been much greater. At times, Spain were toying with their opponents, and only a propensity to over-elaborate in front of goal denied them the more emphatic victory their overall superiority deserved.