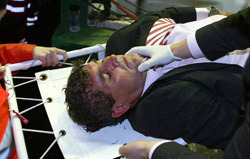 Spain’s sports minister has accused the directors of Real Betis and Sevilla of inflammatory behaviour ahead of a King’s Cup tie that was abandoned after Sevilla coach Juande Ramos was knocked unconscious by a bottle.

“In the days before the game certain individuals from the clubs generated a climate that meant the game could not take place in a normal atmosphere.”

In the build-up to the Seville derby directors from both clubs argued over whether Sevilla president Jose Maria del Nido would be allowed in the VIP box at the Betis stadium.

Betis finally allowed Del Nido to attend the match although a number of fans threw objects at him, one of which hit him on the nose, as he took his seat.

Former Betis coach Ramos was hit on the back of the head by a large plastic bottle full of liquid thrown from the crowd as he celebrated his side’s goal in their quarter-final.

Ramos spent the night in hospital but was discharged with medical staff saying he had not suffered any neurological damage.

The match was abandoned with Sevilla leading the tie 1-0 on aggregate.

Lissavetzky compared the incidents to recent events in Italy in which a policeman was killed in rioting at the Sicilian derby between Catania and Palermo.

“I don’t want to scare people, but the example of Italy is very close,” said Lissavetzky.

“Our problem now is what measures need to be taken to deal with these violent incidents. We have invested a lot of money in security and the stadiums are pretty safe but these incidents keep happening. They must be eradicated.”