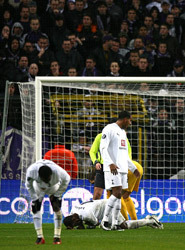 Plenty more Premier League action this week, so click here for our BestPrice betting coupon on all matches!

Tottenham manager Juande Ramos was unhappy after a number of missiles were thrown onto the pitch during the 1-1 Uefa Cup draw at Anderlecht.

Defender Didier Zokora was struck by an object, believed to be a cigarette lighter, thrown from the crowd.

Goalkeeper Paul Robinson handed a metal bar he found lying on the pitch to the fourth official after the match.

“This is very bad for the players and those who work in football,” said head coach Ramos.

“But I did not see what happened. We have to be left in peace on the pitch and you can’t have objects thrown because somebody could get hurt.”

Assistant boss Gus Poyet said there was calmness in the dressing room despite the incidents.

“I think it’s not good for Anderlecht,” he said. “It’s nothing to do with Anderlecht, there are always a few people.

“The lads were calm but they know how dangerous the situation could be.”

Former Genk player Zokora said afterwards: “I played for four years in Belgium – and they hate me!”

Fellow defender Michael Dawson said: “Myself and Pascal Chimbonda went in to make a block challenge and then a few things were thrown, luckily enough they didn’t hit me.

“Didier went off and I am not too sure what hit him. For him to go off, something must have hit him. I could see some coins being thrown around me.

“If you get injured in the game that is part of football but you don’t expect that kind of thing to happen.”

Anderlecht were fined £8,000 earlier in the season for crowd disturbances during a Champions League qualifier against Fenerbahce.

Uefa will investigate this latest occurrence and if the precedent set when Lazio were banned after the referee Anders Frisk was struck by a missile in a Champions League game with Dynamo Kiev in 2004 is followed, the club will be forced to play their next two games behind closed doors.

Plenty more Premier League action this week, so click here for our BestPrice betting coupon on all matches!