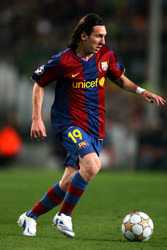 Chelsea have made it into yet another Champions League semi-final, but will now face tournament favourites, Barcelona. See all the early betting here.

Chelsea coach Guus Hiddink’s has admitted that his main concern ahead of his side’s Champions League semi-final first leg at Camp Nou, is coming up with a stretegy to contain Barcelona forward Lionel Messi.

The Argentina international is the leading scorer in this season’s competition with eight goals and Chelsea’s task of handling him has been hit by the suspension of left back Ashley Cole.

Hiddink played Jose Bosingwa, who normally plays on the right, in Cole’s spot in Saturday’s 1-0 Premier League win over West Ham, but said he was still unsure whether the portuguese defender would play in that position on Tuesday.

“I could start crying about not having Cole in that position and also look for excuses,” Hiddink said on Chelsea’s website (www.chelseafc.com).

“I am not like that, I like to put the full energy and the confidence to (the player) who is substituting him in that position,” the Dutchman added.

“Whoever is playing against Messi will have a tremendous job to do because he is the most productive player in the world and one of the players you like to watch, except when you play him.”

Barca are the only non-English club left in the last four of Europe’s top club competition for the second year in a row.

With the exception of long-term injury absentee Gabriel Milito, coach Pep Guardiola has a full squad to choose from following the Primera Liga leaders’ 2-2 draw at fourth-placed Valencia on Saturday.

“We have to rest and recover well because we are about to begin the most important week of the year,” the former Barca and Spain midfielder said.

“I did not see any tiredness in the players,” he added. “We are like a machine.”

Chelsea have made it into yet another Champions League semi-final, but will now face tournament favourites, Barcelona. See all the early betting here.