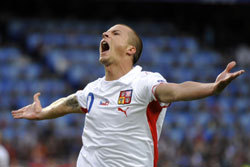 Substitute Vaclav Sverkos secured a 1-0 win for the Czech Republic against Switzerland in the opening game of Euro 2008.

On 70 minutes Sverkos, who had replaced the ineffective Jan Koller midway through the second half, collected a hopeful header from Zdenek Grygera and calmly slotted the ball past Swiss keeper Benaglio.

The defeat was a huge setback for the co-hosts, who also lost inspirational skipper Alexander Frei though injury just before the interval. A tearful Frei limped off the pitch and his particpation in the rest of the tournament looks in doubt.

Frei represented the biggest threat for Jakob Kuhn’s side, twice being denied by the alert Petr Cech in the Czech Republic goal.

The result was harsh on Switzerland, who controlled possession for large parts of the game, but with tough matches against Portugal and Turkey to come in Group A, their hopes of reaching the knockout stages now look slim.

The pattern of the match was set as early as the third minute, when the Czechs squandered possession in their own half, only for Frei drag his shot wide of the target.

Frei looked a threat throughout the opening exchanges and he came close to open the scoring when he latched onto a long punt from keeper Benaglio, only to be denied by the onrushing Cech.

The Swiss skipper followed that up with a powerful 30-yard strike that Cech parried away.

Sadly for Frei it proved to be his last meaningful contribution, as shortly afterwards he was forced to leave the pitch after twisting his knee in a challenge with Grygera.

There was precious little attacking threat from the Czech Republic, and Jan Koller, starved of service, cut an isolated figure up front. It came as no surprise when the Czech’s top scorer was replaced by Vaclav Sverkos.

Switzerland continued to take the game to their opponents in the second half and substitute Yakin squandered a glorious opportunity to break the deadlock when he headed wide from a pinpoint Lichtsteiner cross.

It was to prove a costly miss when, on 70 minutes, Czech substitute Sverkos collected a hopeful ball on the edge of the Swiss penalty area and calmly dispatched his shot past Benaglio.

Switzerland almost snatched a deserved draw when Tranquillo Barnetta’s shot was parried by Cech and Vonlanthen smashed the follow-up against the woodwork. The co-hosts also had two appeals for penalties turned down as they laid siege to the Czech goal.