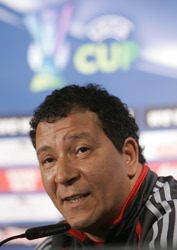 Spanish heavyweights Barcelona and Valencia do battle tonight in the Copa Del Rey. Click here for all our markets on the game!

The Chelsea assistant first-team coach Henk ten Cate has admitted he had a training-ground disagreement with John Terry but denied that he had “no problems” with the Chelsea captain.

Ten Cate conceded that he and Terry had a dispute regarding the ‘intensity’ of a training session in the build-up to Sunday’s 2-1 Wembley defeat to Tottenham.

“We are both kind of emotional, but we respect each other fully,” Ten Cate told The Sun.

“The discussion was about the sharpness of the training, as we have more often. That is part of top football. There have been a few F-words, no doubt. But that’s common in England.”

“On Saturday the distance between me and him was nowhere less than five metres.

“So that we were with our heads against each other, as they wrote, is total nonsense.

And Ten Cate has confirmed that there was a tension in the Chelsea camp before the final, following the decision by Avram Grant to delay naming his side for Sunday’s game.

“We have 27 players and three keepers but only a few of them could play.

“John wanted to have even more intensity in training but I didn’t agree as we were just one day before the match. That was all. Me and John get on well. John won’t disagree.”

Spanish heavyweights Barcelona and Valencia do battle tonight in the Copa Del Rey. Click here for all our markets on the game!