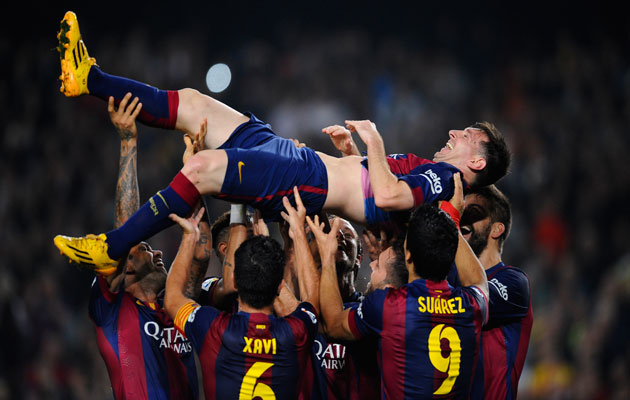 On Friday we looked ahead to the weekend’s football and highlighted some of the matches worth keeping an eye on.

After going three league matches without scoring, Lionel Messi ended what by his standards was a goal drought, by notching a hat-trick against Sevilla and in the process, becoming La Liga’s all-time leading goalscorer.

The next record in the Argentinian’s sights is the Champions League goalscoring record. He currently shares that with Raul on 71 goals, but no one would bet against him surpassing that total this week when Barcelona travel to Apoel Nicosia.

Bnei Sakhnin’s encounter with Beitar Jerusalem resulted in a 1-0 win for the home side but more importantly, after a week of tension in Israel, there was no violence off the pitch. The presence of 500 policemen and 200 additional security staff ensured the match passed off without incident.

Cruzeiro were crowned champions of Brazil after a 2-1 victory against Goias gave them a seven-point lead with two games left to play.

The result in front of nearly 60 000 fans at the Mineirao Stadium in Belo Horizonte means
Cruzeiro are the first team to win consecutive titles since Sao Paulo won three in a row from 2006-08.

ENGLAND
Wigan played their first game under newly-appointed manager Malky Mackay. The match was overshadowed by the controversy over the Scot’s appointment and also by the remarks made by the club’s chairman, Dave Whelan, as he attempted to justify employing a man who is being investigated for the allegedly racist, sexist and homophobic texts he sent when he was manager of Cardiff City.

Disappointingly, Whelan who is also being investigated by the FA over his ill-chosen remarks, was given a standing ovation by the home fans.

After a six-year absence, Roberto Mancini returned as coach of Internazionale with a 1-1 draw in the Milan derby.

He returned to the club, where he won three Serie A titles and two Coppe Italia before his sacking in May 2008.

Elsewhere, Udinese captain Antonio Di Natale scored his 200th Serie A goal in his 400th appearance, but his side had to settle for a point at home to Chievo with a 1-1 draw.

Racing Club replaced River Plate at the top of the Argentinian apertura after beating them 1-0, thanks to an own goal from River defender Ramiro Funes Mori.

Racing have now won their last four league matches and lead the league with 35 points from 17 games, two ahead of River and Lanus in second.

Wolfsburg’s 6-match winning streak came to an end at Schalke. The 3-2 win made it four wins on the trot for Roberto Di Matteo’s side,

The highlight of an uneventful match was the touchline spat involving Moyes and Deportivo assistant coach Roberto Cabellud, which resulted in the latter being sent to the stands.