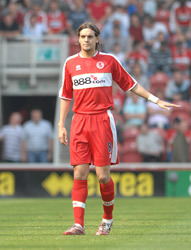 It’s the 5th Round FA Cup draw this lunchtime and with only six top-flight sides remaining the cup is there for the taking. Click here for the latest betting!

A third club has agreed a fee with Middlesbrough for England defender Jonathan Woodgate.

Tottenham were thought to be favourites to sign the 28-year-old with Newcastle also keen on the former Real Madrid defender, but Boro chief executive Keith Lamb has revealed they have also accepted an offer from another, as yet unnamed side.

“We’ve agreed a fee with Tottenham and as far as I’m aware he went down at the weekend to have a medical and we’re just waiting to see,’ Lamb said.

“We agreed a fee with Tottenham, Newcastle and another club but we left it up to Jonathan, he could stay or go.”

Middlesbrough manager Gareth Southgate said: “The latest is that we have given him permission to speak to Newcastle and to Tottenham.

“At this moment I don’t think he’s going to come to Newcastle,” he said.

“I’m almost certain he’s going to move somewhere else – it looks like we’ve lost him and I’m very disappointed. It doesn’t look like he’s going to come.”

Woodgate has been troubled by injuries in the last few years and Lamb said Southgate was happy to let the player go providing his valuation was met.

“We’ve got an abundance of centre-backs and with the emergence of David Wheater and with Robert Huth back and Emanuel Pogatetz, Gareth felt he could let one of them go,” Lamb told talkSPORT.

It’s the 5th Round FA Cup draw this lunchtime and with only six top-flight sides remaining the cup is there for the taking. Click here for the latest betting!