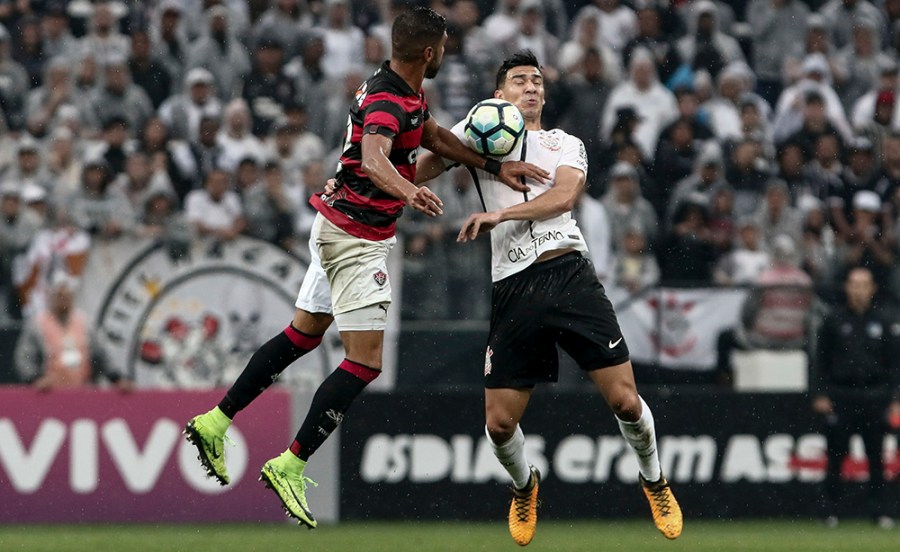 A shock win for Vitoria at the weekend might turn out to be a victory for the Brazilian Championship.

Just past the half way stage – the 21st of 38 rounds – the season was already in grave danger of turning into a one horse race. With a game in hand, unbeaten Corinthians had an eight-point lead, and their closest rivals appeared to have all but given up, fielding weakened sides in the league and saving their best players for other competitions. Second placed Gremio, for example, are in the semi-finals of the Brazilian Cup (first leg last week, second leg this) and the last eight of the Libertadores Cup, and with Corinthians so far in front Gremio have played their last league fixtures with reserve line-ups.

It is just possible that Saturday’s result might make them think again. Corinthians went down 1-0 at home to Vitoria, who were lying second from bottom in the table. It was the first time the club from Salvador had ever beaten Corinthians in Sao Paulo in the Brazilian Championship, and it could not have come at a more surprising moment.

True, the chasing pack did not take advantage on Sunday. Gremio’s second stringers were held to a goalless draw at home to Atletico Paranaense. Third placed Santos played out their second consecutive 0-0, this one away to Coritiba. And reigning champions Palmeiras, who lie fourth, were beaten at home by Chapecoense.

Corinthians’ lead, then, has only been cut by one point, to seven. And it will reach double figures should they win that game in hand, this Wednesday away to Chapecoense.

Nevertheless, perhaps a chink of light has appeared. During a long league campaign all teams hit a bad patch – success is often dependent on how quickly they can pull out of it.  Will Corinthians’ defeat shake the team’s self-belief? It would seem the only hope of a genuine contest for the title.

It would, though, seem unlikely – and not just because the league leader’s next game is conveniently at home to bottom of the table whipping boys Atletico Goianiense. More to the point, there was nothing radically wrong with Corinthians’ performance on Saturday. There was much to admire, and plenty to explain the long unbeaten run.

At the start of the year some even saw Corinthians as the fourth force in their home state, behind Palmeiras, Santos and Sao Paulo. Paying for the new, World Cup stadium is proving a burden on finances, the squad was seen as nothing special and, promoted from his previous post of assistant, Fabio Carille was nowhere near first choice to take over as coach.

Carille worked under current national team coach Tite, who had two highly successful recent spells with the club, and it shows. His team have the same compact manner of playing that has become the hallmark of Tite’s sides. They are solid in defence, look to win the ball high up the field and generate the numerical superiority that leaves the man on the ball with plenty of options for a quick pass. Centre forward Jo is in fine form, working well as a pivot with lots of runners getting close to him in support. It is a brand of modern, collective football which gives Corinthians a clear advantage over the chasing pack, with the possible exception of the eye-pleasing passing game of Gremio.

Future opponents may be able to take some heart from the way that Vitoria played. Coach Vagner Mancini cleverly sent wide attacker Neilton floating infield, and he managed to find space between the Corinthians centre backs and the central midfield duo. This was how Saturday’s goal was scored, Neilton setting up Colombian striker Santiago Trellez for a cross shot which beat goalkeeper Cassio with the aid of a slight deflection. Other teams might probe the same space. But the only chance of Corinthians being overhauled is if the team suddenly implodes. That early Vitoria goal was only the second time they have gone behind in 20 league matches. They are not used to having to chase the game. But for the foreseeable future, it is the teams behind them in the table who have to do the chasing.