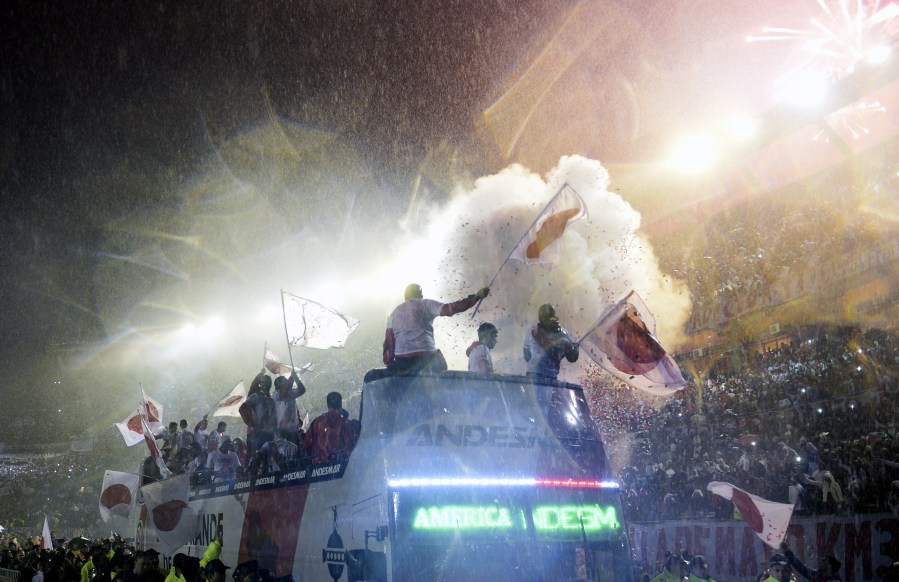 A single moment of quality was enough to decide the destiny of the 56th version of the Copa Libertadores. It came on the stroke of half-time in the second leg, when Argentina’s River Plate broke the deadlock against Tigres of Mexico.

The first leg had ended goalless, which was a triumph for River coach Marcelo Gallardo. His team had faced a long journey to the north of Mexico to play a match against in-form opponents in the high temperatures of the northern hemisphere summer. A week earlier in the semi-final, Brazil’s Internacional had proved unable to defend in such circumstances. River, though, were able to blunt the home attack. It helped that Tigres left-winger Javier Aquino missed the match through injury. But though Jurgen Damm on the other flank threatened danger, Jonathan Maidana kept a tight rein on French centre forward Andre Gignac.

The key, though, was intensity of River’s midfield marking. Last year Gallardo had plenty of success playing a classic diamond formation. During the course of a frequently troubled Libertadores campaign, he had needed to rethink his side. Now he had two men in the centre: Matias Kranevitter playing the more defensive role, with the experienced Leo Ponzio slotting in alongside him. With Carlos Sanchez, the team’s outstanding player of the campaign, running himself into the ground on the right, River were able to break up Tigres’ rhythm. It came at a price, though. River completed fewer passes and committed more fouls than in any of their previous matches.

Back in Buenos Aires a week later, could they add some attacking flair to the mix?

The answer, until that key moment just before the break, was resoundingly in the negative. As driving rain set in, the first half was shaping up as a spectacle of lamentable quality, a festival of misplaced passes and (being charitable) mistimed tackles. Tigres had looked more dangerous. Damm was once more a threat, and the recovered Aquino was giving a testing time to Camilo Mayada, a midfielder improvised at right-back. River had produced nothing, until, out of the blue, left-back Leonel Vangioni came up with a turn, a burst and a fine cross whipped behind the defensive line. Centre forward Lucas Alario made his run in front of Jose Rivas to glance the ball inside the near post.

Alario, brought in during the Copa America from Colon of Santa Fe, had also proved decisive in the semi-final.  Coach Gallardo has compared his role to that of the young Hernan Crespo in River’s last Libertadores triumph, back in 1996. It would be unwise, though, to stretch the link much further. That team, with Enzo Francescoli, Ariel Ortega, Juan Pablo Sorin and Matias Almeyda, was so strong that the young Gallardo had to settle for a place on the bench.

The current side, reflecting the economic chasm which has subsequently opened up between football in Europe and South America, is a collection of journeymen in comparison.

The final scoreline of 3-0 may make it seem as if River then rammed home their advantage in the second half.  But that would be misleading. The onus, of course, was on Tigres to get back on level terms, and the game took place in the River half.  Gignac wasted an opportunity, Aquino could not make the height to convert a header at the far post, and soon afterwards Mayada made a vital interception. River’s second goal, just inside the last 20 minutes, was as out of the blue as the first, only without the same quality. Tigres made an error playing out of defence, and Aquino gave away a soft penalty on the left of the area. Sanchez, whose dynamism had forced the foul, picked himself up to slot home, and the game was as good as over.

There was time for a third, when Tigres, their defence now all over the place, allowed River centre back Ramiro Funes Mori to have a free run and header from a corner.

And so River claimed their third Libertadores title, and after the success of San Lorenzo last year, a second consecutive triumph for Argentina. River will represent South America at the end of the year in the Club World Cup in Japan – a tournament which, in recent years, has been a sobering experience for the South Americans, and may be again this time, for the River Plate class of 2015 have plenty of heart but little of the club’s traditional panache.