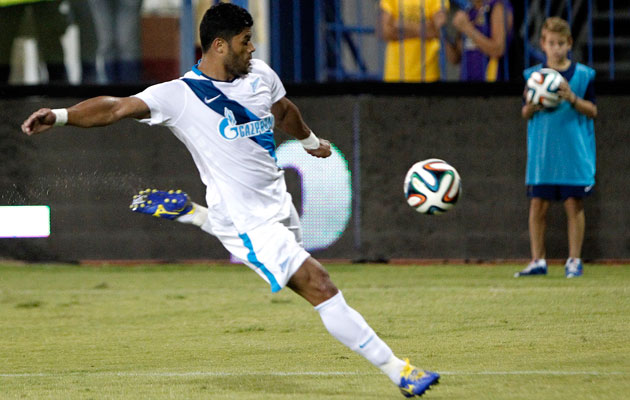 The Brazilian, who has been the victim of racist abuse before, was taunted with monkey chants during Zenit’s 1-1 draw with Torpedo on Sunday.

The Russian Football Union disciplinary commission ruled Hulk was targeted due to his “ethnicity and skin color,” and handed Torpedo its third racism-related sanction of the season.

“Due to the offensive racial behaviour of the Torpedo fans towards Hulk we have fined the club 300,000 roubles (£3,337) and they will have to play two home league matches behind closed doors,” Russian Football Union disciplinary committee chief Artur Grigoryants said Wednesday.

“If there is a repeat of this racial abuse there will be an even stronger punishment next time.”

It is the second time this season that Hulk has been racially abused in Russia. In September, Spartak Moscow fans were banned from one away league game because of similar monkey chants.

The club has a long and ignoble history of racism: in September Torpedo were forced to play one match with part of their stadium closed after fans directed racist chants at Dynamo Moscow’s Christopher Samba.

Two months later, the club were found guilty of racially abusing some of Rostov’s black players for which Torpedo had to play three home matches with the stadium partially closed.

Premier League president Sergei Pryadkin acknowledged there was a problem with racism in Russia football, but claimed it was relatively insignificant.

“This is not the main problem facing us but racism certainly is a problem,” he said.

“In some countries where football is very well developed this problem occurs and racism happens every week. Even in more advanced football countries like England, which is said to be an example to us, the problem is more common.

“We will take responsibility for what has happened. Together with the Russian Football Union and the Sports Ministry we will work to cut out this problem.

“We have a lot of different nationalities in our country, no other country in the world has as many, but every club unfortunately has its undesirable elements. Only tough measures will help to overcome the problem of racism.”