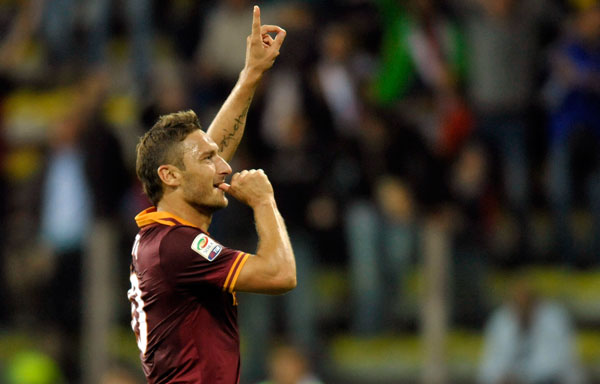 Francesco Totti, who retired from international football back in 2007, has admitted he would be open to a call-up to the Italy squad for the World Cup.

There have been suggestions that Italy coach Cesare Prandelli would like to take Totti to Brazil after his impressive form for Roma this season.

Totti, a member of Italy’s World Cup-winning side in 2006, admits he would be proud to be involved this summer, but that any decision would rest on his fitness.

“If Prandelli were to call me then I would be proud,” Totti told Sky Sport Italia.

“I’d be happy, because the World Cup at Brazil would not come around again for me.

“But, I’ve always said that I will have to see how I am physically, if I would be alright or not. That’s the main thing.

“I hope that the national team can get to the final. They have the ability to do well, then Italy have increasingly come close to the semi-finals, so we hope it bodes well.”

Last autumn, Prandelli admitted that he would take the 37-year-old if the World Cup was being played then.

“Totti is in fantastic form, he said last October. “His condition right now does make you reflect.

“If the World Cup was around the corner, I would have no doubts and would absolutely call him up. But we will evaluate the player’s condition one month prior to the World Cup.”

One can’t help but wonder whether Totti may be setting a new trend when it comes to the way big-name players treat international football. Leave the messy business of qualifying to the minions, but make yourself available for the glory of the finals.

As to whether Totti still has what it takes, here’s a compilation of him from the current season.