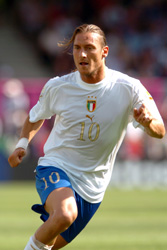 Francesco Totti has hinted he may return to the Italian national side next season.

The Roma forward said he was taking a break from international football following last year’s World Cup triumph and has not played for the Azzurri since.

Totti has been in inspirational form this season, scoring 26 goals in Serie A, prompting calls in Italy for him to return to the national team.

“I am not having an operation. Now I will go on holiday and think of my family and of resting. This year I have played more than 50 games and in my condition it is hard. I need to get away,” Totti told newspaper Il Messaggero on Monday.

“In July, I will telephone (Italy team manager) Gigi Riva and I will tell him how I am and what I am thinking of doing. Then we will see.”

Italy coach Roberto Donadoni has said he will talk with the striker only after Wednesday’s match against Lithuania.

Milan defender Alessandro Nesta asked to be left out of Donadoni’s squad so he could get married, but he has also hinted that his international career may be over.