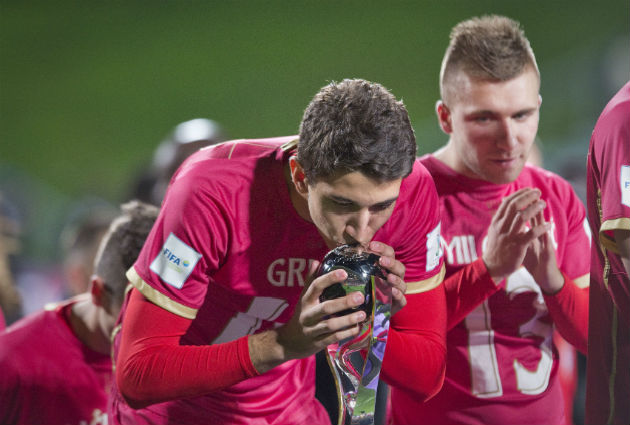 Jurgen Klopp has fended off a late transfer swoop from Zenit St Petersburg and CSKA Moscow for midfielder Marko Grujic, with the 19-year-old midfielder arriving on Merseyside for a medical ahead of his proposed £5.1m move to Liverpool according to Sky Sports.

The Red Star Belgrade midfielder arrived in Liverpool on the weekend after having already agreed a five-year contract with the Reds.

According to the Liverpool Echo, the deal will see him return straight to Serbia for the remainder of the season on loan with Red Star.

Zenit St Petersburg and CSKA Moscow made late attempts for the 19-year-old, with both offering 10m euros – higher bids than Liverpool’s – but Grujic was insistent on moving to Anfield. The teenager confirmed the news at the weekend when he posted on his Facebook account: “On 4th January I will become a Liverpool player.”

The move appeared to hit a stumbling block with the player’s father making an intervention and taking away Grujic’s passport. According to Sky Sports he told Serbian paper Blic. “His passport is with me and I pronounce that Marko is not going anywhere.”

However Red Star said in a statement on the clubs website that a deal had been agreed between both clubs with the transfer fund helping the clubs finances:

“Everyone at Red Star wanted Marko Grujic to play here for 10 years, but the financial situation of the club dictates a different decision,” the statement read.

“We wanted to respect the desire of the player’s father to stay until next summer and we agreed to pay Liverpool for a loan of six months. Income from the transfer solves most of its financial problems.”

Red Star are expected to pay Liverpool 1million euros (£730,000) back as a loan fee and have also negotiated a 10% sell-on clause.

Grujic has impressed for Red Star, helping the club amass a healthy 25 point lead at the top of the Serbian SuperLiga. He is a tall and strong central midfielder, and has been lauded in his homeland for possessing a great passing game, combined with excellent vision.

The Serbia U21 international was also a member of Serbia’s FIFA U20 World Cup winning side in 2015 and Zeljko Paunovic, who coached Serbia U20s to World Cup glory spoke highly of Grujic:

“He is a good lad with great mentality, he’s not a born leader, but he’s not afraid to play big games.” he said.