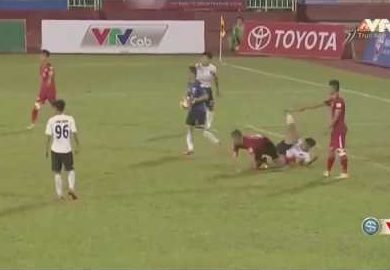 Two Vietnamese footballers have been handed two-year bans after they were involved in an unconventional penalty protest during a league match last weekend.

The Vietnamese Football Federation imposed the bans and also suspended a coach for three years after their team reacted furiously to the referee awarding a penalty.

Long An players were unhappy when referee Nguyen Trung Thu pointed to the spot with their team drawing with Ho Chi Minh City when the score was locked 2-2 late on Sunday.

After initially walking off in protest, the players returned to the pitch but goalkeeper Nguyen Minh Nhut made no attempt to save the spot-kick, instead turning his back to the penalty taker.

VFF have banned Long An GK Minh Nhựt & Captain Quang Thanh for 2 years for refusing to play on against HCMC #vleague pic.twitter.com/JbltSErJmP

The whole team then stood still while Ho Chi Minh City raced up the field to score twice and extend their lead to 5-2.

In a statement, the VFF said that Mimh Nhut and captain Huynh Quang Thanh would banned for 24 months “due to disrupting the match, not respecting the decision of the referee and causing damage to the reputation and honour of the Vietnam Football Federation.”

Coach Ngo Quang Sang has been banned for three years, as has club chairman Vo Thanh Nhiem, who quit after the game.