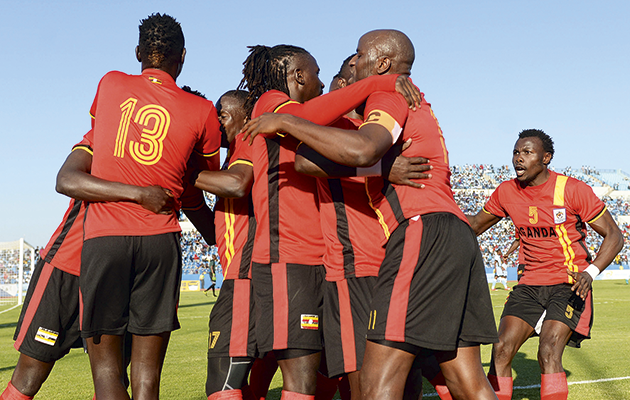 The final round of qualifiers to determine places in next year’s African Nations Cup finals provided yet another snapshot of the two extremes of the game on the continent: the unbridled joy that comes with long-awaited success and a darker side where barely believable scenarios continue to cast aspersions on the validity of results.

Uganda were runners-up at the 1978 finals but since then they have failed with regular monotony to qualify. In recent attempts they have come agonisingly close, no more so than ahead of the 2013 finals when they lost a penalty shoot-out to defending champions Zambia.

But after almost four decades they return to the top table having secured their place on the last weekend of the preliminaries with a home win over Comoros.

Farouk Miya, recently signed by Standard Liege, scored the only goal of the game at Kampala’s Nelson Mandela Stadium to set off heart-warming celebrations for a country that has long lusted after a finals place.

The Cranes, who are also in the group phase of the 2018 World Cup qualifiers, have been a work in progress for some time now, first under Scottish coach Bobby Williamson and then Serbian boss Milutin Sredojevic.

Uganda actually finished second in their group, but they took one of the two berths reserved for the best runners-ups in the 13 groups. They finished behind Burkina Faso on head-to-head results after both gained 13 points. But while Uganda’s qualification proved a bright point, Burkina Faso advanced in the most dubious of circumstances.

Having to win at home to Botswana to qualify, Burkina Faso secured a 2-1 victory with virtually the last kick of the game as the referee seemed to play on for an eternity.

“Nine minutes of stoppage time was shown at the end of the game but 11 were actually played,” says Botswana coach Peter Butler, whose side were down to nine men by then. “My goalkeeper got punched by their centre-forward and yet he was sent off and not the striker.

“I’m not one for blaming referees, but in African football I’ve learnt that nothing surprises anymore.

“The 11 minutes of added time paints the picture, but I wish Burkina Faso well. My players were magnificent. I was very proud of the way we played.”

Defending champions Ivory Coast also looked fortunate to qualify, although any evidence to the contrary was quickly buried by the bias of their own television coverage. They seemed to be handed an easy group and in their last game needed just to avoid defeat at home to Sierra Leone in what seemed a routine assignment. But without Yaya Toure and Wilfried Bony the Elephants looked somewhat light on match-winning talent.

Although they were 1-0 up at half-time, the Ivorians were pegged back midway through the second half when Sierra Leone striker Kei Kamara equalised. It was no more than the Leone Stars deserved as they sought an unlikely win that would have put them into the finals.

The last action of the game was a Sierra Leone corner, followed by a header which they felt had crossed the line. However, the referee disagreed and blew his whistle immediately to end the game, allowing Ivory Coast to squeeze into the finals. Local television coverage then concentrated on muted home celebrations rather than offering any slow motion replays that might have helped determine whether the ball had crossed the line or not.

Democratic Republic of Congo, Togo and Tunisia grabbed the other three places that were up for grabs
on the last weekend of qualifiers.

Togo were the other side to benefit from a good second-placed finish, having looked all but eliminated at the midway point. They hired veteran French coach Claude Le Roy to revive their campaign and, after persuading Emmanuel Adebayor to rejoin the cause, fashioned an against-the-odds achievement.

Le Roy will now extend his record as the coach with the most Nations Cup finals appearances as he heads to his ninth tournament.