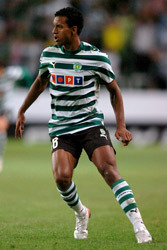 Manchester United look set to take their summer spending to beyond the £50m mark after moving swiftly to agree deals in principle to sign Anderson from FC Porto and Nani from Sporting Lisbon.

The Premiership champions are set to recruit Brazilian midfielder Anderson, 19, and Portuguese winger Nani, 20, in a deal that is expected to rise to about £30m.

United are also set to sign Owen Hargreaves from Bayern Munich for £17m.

A delegation from United, led by the chief executive, David Gill, and the assistant manager, Carlos Queiroz, were in Lisbon on Wednesday holding formal talks with officials from the Portuguese clubs.

“Terms are agreed with both players and an announcement will take place once a medical and other procedures are done,” said a statement on United’s website.

Anderson has described the proposed move to Old Trafford as ” a dream come true”.

“I cannot wait to play in the same team as Cristiano Ronaldo, who is a great player, as well as Wayne Rooney and many more,” he said.

“I could not imagine I would ever get to work with a manager like Sir Alex Ferguson but it has happened. What can I say? It is a dream the size of the world.”

“Manchester is the club of my dreams.

“Gremio was my first club, but soon I followed to Porto but it still has a big place in my heart, it is a club which is very important in my life – but the fact is I have dreamed of playing for Manchester and now that is realised.”

Anderson, who like compatriot Ronaldinho, began his career with Gremio, has been named in Brazil coach Dunga’s squad for the Copa America in Venezuela next month. The winger was named player of the tournament in the 2005 under-17 world championship

Nani had also been linked with a move to Tottenham, but recently United have won the race for his signature.

The youngster is considered the most exciting homegrown forward to have emerged in Portugal since Ronaldo.

“Going to England is an attractive option for me because the Premiership is one of the best leagues in the world and it would be a good challenge,” said Nani last week. “I believe I would progress there.”

Nani has played five times for Portugal, scoring once. He is regarded as the long-term successor to Ryan Giggs.