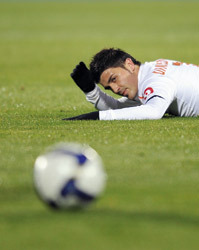 Skybet have slashed their odds on Franck Ribery joining Liverpool – do you believe Benitez will land the Frenchman?

Valencia have set a minimum price of €50 million for the sale of David Villa, Marca has reported.

The 27-year-old Spain striker has been the subject of attention fromReal Madrid and Barcelona as well as Manchester City and Chelsea from the Premiership.

Villa’s agent Jose Luis Tamargo held a meeting with Valencia management on Monday and was informed that the player would stay unless a really big offer came in.

Real Madrid were deterred by the asking price for Villa and opted instead to sign French international striker Karim Benzema from Lyon.

Joan Laporta, chairman at the Nou Camp, was recently quoted as saying Barca were looking for a new striker to cover for Samuel Eto’o, whose commitment to the Spanish and European champions is in doubt even though he has been offered a contract extension.

Skybet have slashed their odds on Franck Ribery joining Liverpool – do you believe Benitez will land the Frenchman?