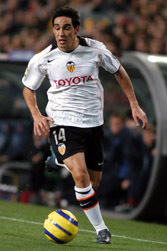 Valencia have rejected an approach from Manchester United for winger Vicente.

Vicente is believed to be Sir Alex Ferguson’s latest transfer target, but the Scot was told that the Spanish international was not for sale.

Valencia club president Juan Soler confirmed he had rebuffed an enquiry from Old Trafford for the £15m rated wide man.

“A director at the English club called me but Vicente is totally untransferable,” Soler told The Sun.

Vicente is also aware of the interest from United but acknowledged he has no desire to quit Valencia.

The winger said: “It’s pleasing United are interested but I’m happy at Valencia.

“I know that United are interested in me but I didn’t speak to anyone.

“The president informed me about this situation.

“But I’m happy to remain at Valencia because I was born here and it’s my home.”