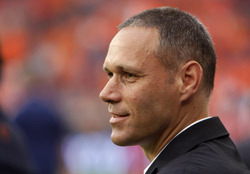 Holland sent shockwaves through Euro 2008 with a 3-0 demolition job of world champions Italy, but what price the Oranje now?

Holland coach Marco van Basten was elated after seeing his side record a 3-0 win over Italy in their opening Euro 2008 clash.

The Dutch are now clear at the top of Group C and know victory in their next game will guarantee their place in the last eight.

“This is a dream start,” Van Basten said.

“To win 3-0 against Italy, a team with so much experience and quality in their team, we didn’t expect that.

“It was a truly good team performance from the whole team.

“The first game is always a big match, and the whole team gave a performance and then to win 3-0, it is a fantastic, historical performance.

It is 30 years since Holland last beat Italy, and on that occasion they went on to reach the 1978 World Cup final.

“We had never beaten the Italians with a result like this and now in a competitive match we have beaten the world champions, scored three goals and played good football,” Van Basten told reporters.

Holland were forced to defend in the second half as Italy searched for the goal that would bring them back into the match but it never materialised.

“Even then we kept playing football and made it difficult for Italy,” Van Basten said. “Our last goal was really a compliment to how my team performed today.”

“We dominated them on more than one front on the pitch and should be proud of that.”

Van Basten, whose side face World Cup runners-up in their next game on Friday, was still cautious about his side’s chances of reaching the knockout stages.

“This was only one match and we have two more to go,” he said. “Our next opponents France are physically strong and they really have to go for it after their draw against Romania.”

Holland sent shockwaves through Euro 2008 with a 3-0 demolition job of world champions Italy, but what price the Oranje now?