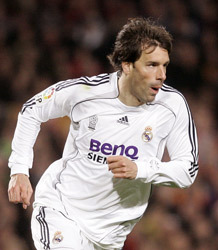 Real Madrid striker Ruud van Nistelrooy has vowed to fight back from a career-threatening injury to his right knee.

The Dutchman will miss the rest of the season after undergoing surgery on a partially torn cartilage.

“This is one of the most difficult moments in my career,” the 32-year-old told Marca.

“But I have two options – give up or fight. I know I need to fight and my battle has just begun.

“It’s pretty tough to be told that I will not return to play until the start of next season, that I will be sidelined for eight or nine months,” he said.

“I had no other option but to undergo surgery. The injury was a serious one [but] I’ve gone to the best knee surgeon.

“He has done the some operation to American football players, basketball players and they always come out well.

Van Nistelrooy, who has scored 45 league goals, including four this season, for Real since joining from United two years ago, said he was determined that his latest injury would not mark the end of his career.

“It’s true that I’m 32,” he said. “But eight years ago I went through a similar situation as this one and I know what I have to do.

“I want to return to top form and be the player I was before. I have lots of goals left to score for Madrid and many aims yet to achieve.

“I still have a Champions League yet to win and I will give everything to win it.