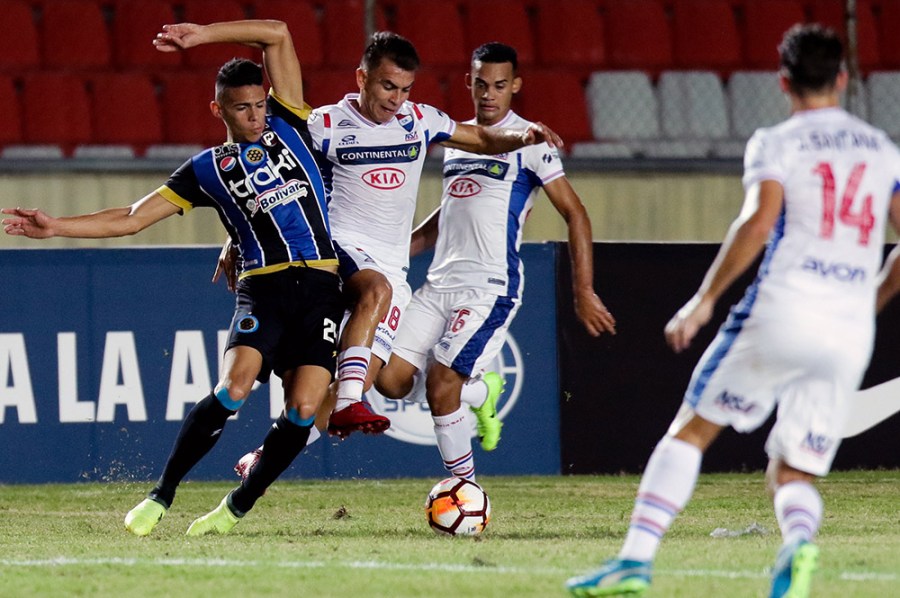 If Tottenham came close to glory before blowing the chance last week, then a club from Venezuela came even closer.

Last Thursday Mineros were at home to Nacional of Paraguay in the second leg of their clash in the Sudamericana Cup, the Europa League equivalent. The game in Asuncion had finished goalless, and the same thing happened in Puerto Ordaz. The tie went to penalties. After three rounds, Mineros led 3-1.  They could hardly be closer to a place in the next round. One successful penalty from their last two, or one more failure to convert from Nacional, and the Venezuelans would be through. The stadium was ready to celebrate. And then, one by one, the chances went begging. After two consecutive Mineros misses, and two consecutive Nacional successes, the scores were level at 3-3. Sudden death ensued. Mineros missed, Nacional scored and the Paraguayans were the ones doing the celebrating.

The events of the previous five minutes might have seemed all but impossible. But even so the outcome did not come as a complete surprise. The doubts were always there; could Mineros really drag themselves over the line? Or might, against all odds, the legendary battling spirit of the Paraguayans prevail?

It is, perhaps, something of a South American variation of the Tottenham-Juventus debate on the importance of tradition – or, as they say on this side of the Atlantic, the respective “weight” of the shirts.

The Venezuelan game lacks tradition. Historically the country has been much more interested in baseball. Football has made enormous strides over the course of the last two decades – though the domestic game suffers from the exodus of the promising players that the country now produces. Paraguayan football also gets by on scarce resources. But in a different context. First, since the insane heroics of the war against Brazil, Argentina and Uruguay in the 1870s, the Paraguayans have an image of themselves as the toughest of warriors, laughing in the face of overwhelming odds. Moreover, this has been part of the fibre of Paraguayan football for a century. Nacional, a tiny club from Asuncion, even battled their way through to the final of the Libertadores in 2014.

Tradition matters. Institutions matter. They reproduce themselves by passing knowledge and culture from one generation to the next. This, of course, needs leaders to serve as the examples and conduits of collective culture. Juventus have the likes of Gianluigi Buffon and Giorgio Chiellini.

Mineros are no bunch of novices; midfielder Edgar Gimenez and left back Jose Granados are seasoned professionals, and playmaker Louis Angelo Pena has bounced round clubs in a number of different countries without ever reaching his full potential. But in terms of top level experience, they were outgunned. Nacional can count on the veteran Paraguayan international Carlos Bonet, the vastly experienced Uruguayan Juan Manuel Salgueiro, and the Argentina-born Paraguayan Jonathan Santana, ex River Plate, who coolly stepped up to slide home the decisive penalty.

Confidence is not an abstract. It derives from one’s own perception of capacity to carry out a determined task. Being part of an institution with a victorious history can be a considerable boost to confidence. But this does not always apply.

There was no great lack of experience on the field when Brazil went through that extraordinary first half collapse against Germany in the semi-final of the last World Cup.  The side was full of big name players. The bulk of them had won the Confederations Cup the year before. After that final, when Brazil saw off Spain 3-0, goalkeeper Julio Cesar said that the Spanish had to recognise that football has its hierarchies. The point he was making was clear; at that moment Spain were the reigning world champions. But with five wins under their belt, Brazil still stood at the top of the tree.

But it was the pressure of living up to the demands of that hierarchy that blew the team apart in that famous 7-1 defeat against the Germans. For all the deficiencies of that Brazil side, they could play Germany as many times as you like outside the conditions and pressures of the World Cup without ever losing again by such a humiliating margin. In this case the Brazil players were clearly intimidated and terrified by the burden of their own team’s tradition.  Because however much the shirt might “weigh”, it will never win matches on its own.