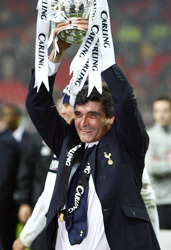 Fancy a free bet on the Grand National this year? easyodds are giving away £5 free bets on the 2008 National. Click here for more info!

Ramos, who won the Uefa Cup twice with Sevilla as well as the Uefa Super Cup and Copa del Rey, has transformed Spurs’ fortunes since replacing Martin Jol at the end of October.

The Spaniard believes the result demonstrates that Spurs can compete for the bigger prizes over the coming years.

“The team has been improving little by little in the terms of the security and confidence that they feel,” said Ramo. “This final reaffirmed that. They have improved their general demeanour, like in the [recent] games against Arsenal and Manchester United, and Chelsea are another one of those teams, they are on the same level.

“They have shown they are able to concentrate, to fight with the best of them. The key was not making mistakes. They managed that.

“It’s always a tremendous satisfaction to win a trophy, especially for the club itself. This one perhaps has a special flavour to it because it was against a team that was supposedly superior to us. It’s similar to [his former club] Sevilla playing against the likes of Barcelona and Real Madrid and beating them.

“The truth is that this was a beautiful experience. The format is very different to the finals that I’ve been involved in in Spain before, having the red carpet and so on. We’ve enjoyed very much this victory with our fans in the stadium, it’s been a unique experience and one I hope to repeat in the future.”

Tottenham trailed to Didier Drogba’s first-half free-kick but equalised through a Dimitar Berbatov penalty. Jonathan Woodgate headed the winner courtesy of a deflection off Petr Cech, the Chelsea goalkeeper.

“It was my first goal since Real Madrid,” Wopodgate said. “I wasn’t planning on going up. I just took a chance. Everyone dreams of scoring the winning goal in a cup final and I’m delighted. Hopefully this isn’t going to be the last trophy. We’re still in the Uefa Cup and that is definitely a possibility.”

Woodgate, along with defensive partner Ledley King, were commanding at the heart of the Tottenham defence.

“This was the sort of game that it was very important that Ledley played in,” said Ramos. “He made a tremendous effort to be able to play. Having lost the last time he played in a final [the 2002 League Cup against Blackburn], this was a new experience for him and one which he deserved.

“He and Woodgate had magnificent games but that was the case with the team as a whole. We were playing against a team of great players like Drogba so they had to concentrate to the maximum possible. We managed and in the end, we deserved to win this title.”

Fancy a free bet on the Grand National this year? easyodds are giving away £5 free bets on the 2008 National. Click here for more info!