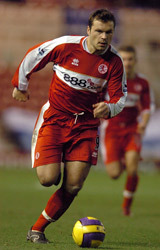 Middlesbrough striker Mark Viduka is undergoing a medical at Newcastle, with a view to completing a free transfer.

The 31-year-old Australian striker had been offered a new contract by Boro, but is reported to have given a verbal agreement to join Newcastle.

“Yes, I am interested in Tal Ben Haim. He is a free agent and is hopefully available.

“He has got three or four years of experience in the Premiership and I know him inside out.

“We had a good working relationship, we grew in the Premiership together and I’m very interested in working with him again.”

On the potential signing of Viduka, Allardyce added: “Mark is almost in the bag. It has been difficult because he has been on holiday but we are nearly there.”