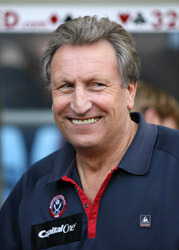 Neil Warnock has resigned as Sheffield United boss – three days after the club were relegated from the Premiership.

The 58-year-old has been in charge at Bramall Lane for seven-and-a-half years, but he is reported to have been unhappy at the new deal the club offered him.

Warnock met with club officials on Tuesday, having revealed in the aftermath of the defeat to Wigan that he was considering his position.

“I believe that this is the right time for me to go,” said Warnock. “I’m proud of what I have achieved at this club, but the decision is best for everyone.

“I honestly feel the squad here is the best equipped of the three relegated teams to mount a bid for an immediate return to the Premiership.

“I feel proud of what I have achieved with the club and of becoming the third longest-serving Blades manager, but this decision is the right one.”

Warnock also said he wanted one more challenge before retiring from football.

“This past season has only whetted my appetite to achieve success in the game,” he said.

“I am still enthusiastic about managing, am experienced enough to make a fresh start elsewhere and I will relish an opportunity to continue managing for a few more years.”