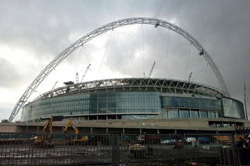 Wembley stadum, originally conceived as the centrepiece of England’s bid to host the 2006 World Cup, will not be completed until 2007.

Work on the stadium will not be finished in time for an England friendly in August and two Euro 2008 qualifiers scheduled for September and October.

The Community Shield on 13 August will have to be staged at another venue – possibly Cardiff’s Millennium Stadium.

Builders Multiplex announced on Friday that it hoped most of the remaining work on the 90,000 seat venue would be completed by the end of the June, but the finishing touches to the project are unlikely to be completed this year.

Friday was the official deadline for the handover of the £757million stadium from Multiplex to the FA. Three deadlines have already been missed.

England’s first match after the World Cup finals is a friendly scheduled for 16 August, followed by the two qualifiers against Andorra on 2 September and Macedonia on 7 October.

Those games will now have to be moved, possibly to Old Trafford, home of Manchester United.

It now looks like England’s first competitive international fixture at the new Wembley will now be on 8 September 2007 when England entertain Israel in a Euro 2008 qualifier.

That will be seven years after England’s last competitive game at the ground.